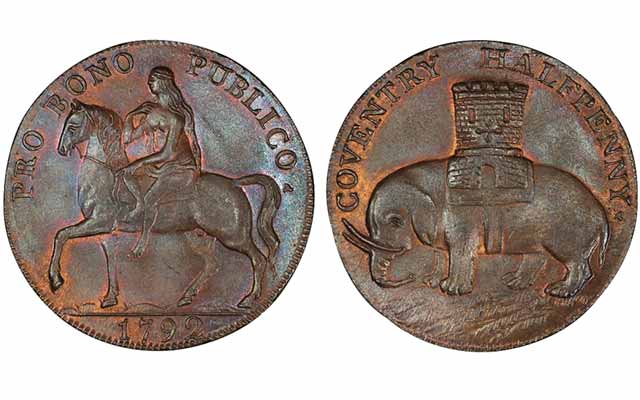 Lady Godiva bares it all on this 18th-century chocolate brown halfpenny token from Coventry, where legend says the noblewoman rode nude through town.

Atlas Numismatics has updated its website with 556 new coins, medals, and tokens being offered at fixed price.

One of the highlights of new inventory recalls the legend of Lady Godiva.

The chocolate-brown 18th-century halfpenny token from Coventry features the famed equestrian on the obverse, with the elephant-and-castle symbol of the town on the reverse.

The Anglo-Saxon noblewoman (who lived from 1040 to 1067), was said to have ridden nude on horseback — covered only by her long hair — through the streets of Coventry, in Warwickshire, Great Britain.

She made her ride in an attempt to gain a remission of the oppressive taxation imposed by her husband on his tenants.

Later versions of this incident mention a certain "Tom" who is said to have watched her ride and was struck either blind or dead upon viewing her. The name “Peeping Tom” for a voyeur originates from this story, according to Atlas Numismatics.

The 1792-dated copper halfpenny is cataloged as Dalton & Hamer-231, in The Provincial Token-Coinage of the 18th-Century Illustrated, by R. Dalton and S.H. Hamer.

The token available through Atlas is graded Mint State 65 Brown by Professional Coin Grading Service and carries a price tag of $575.

It is an “Extremely popular type,” the firm notes.

Other selections in the latest list are a signed Ptolemaic tetradrachm, a circa 1852 silver enameled 1 Kyat Peacock rupee, a 1908 gold "Lady in the Clouds" 100 corona coin from Austria and a 1798 bronze medal celebrating Napoleon’s battles in Egypt.

Atlas will be attending the Whitman Summer Expo from July 16 to 19, in Baltimore, Md., and the American Numismatic Assocation World’s Fair of Money from Aug. 11 to 15, in Rosemont, Ill.

The firm updates its online inventory monthly, and produces a monthly newsletter.