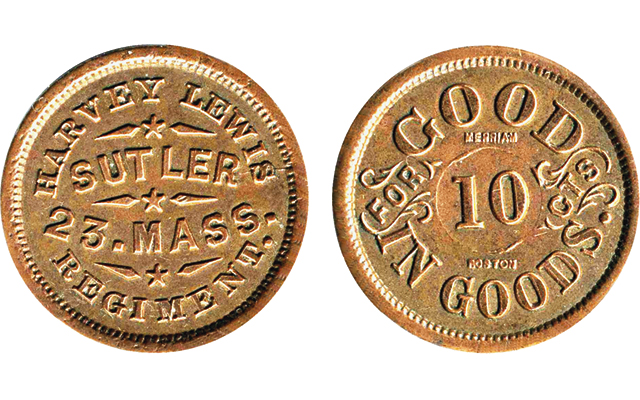 Images show the obverse and reverse of a token issued by Harvey Lewis, sutler to the 25th Massachusetts Infantry Regiment, the variety known as Schenkman MA B10C. 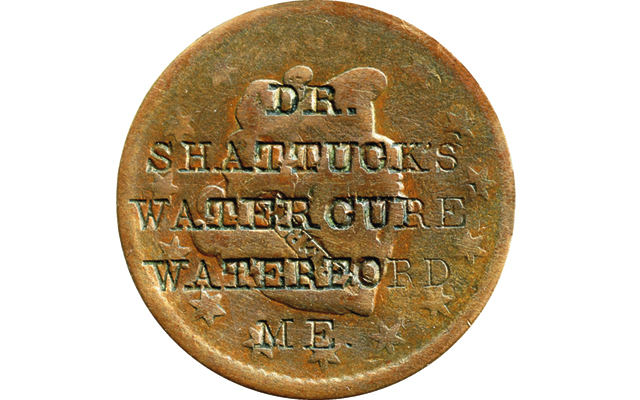 While I dearly love coins, medals, tokens, and paper money, I think I love writing about them even more.

I may never personally own an 1804 silver dollar, but in 1999 I spent many pleasant hours writing 490 pages (!) about the adventures of Edmund Roberts who sailed to the far side of the world to deliver presentation Proof sets that contained Proof examples of these now-famous rarities.

At another time I found the counterstamped coins issued by Dr. Shattuck’s Water Cure of Waterford, Maine, to be fascinating — and spent months tracking down everything I could, including visiting the still-standing premises. John J. Ford Jr. said that of all the books I had written up to that point (1992) this was his very favorite. Similar to phrenology, the water cure was a sensation in the mid-19th century. The idea was that spending a week or more taking warm and cold baths cured about every ailment known to mankind.

In the same vein was another book, The Strange Career of Dr. Wilkins: A Numismatic Inquiry. Wilkins, a dentist by profession, also ran a restaurant, kept a caged bear in front of the eatery, was involved in passing counterfeit money, and was suspected of burning down the barn of a man who crossed him. Starting in the 1850s he counterstamped countless coins with his advertisement — little billboards that advertised his practice as they passed from hand to hand.

Among current research projects I am compiling a brief study of sutlers’ tokens to be added to a new edition of one of my Whitman books. As you may know these tokens are mostly the size of cents, are of various denominations usually 5, 10, 25, and 50 cents, and were issued as money to troops by sutlers. These men were licensed and traveled with the various regiments, selling all sorts of goods from stores set up in tents or other premises. The standard work on this is Civil War Sutler Tokens and Cardboard Scrip published by David Schenkman in 1993. Dave, a fine friend for many years, has allowed me to use information in this magisterial study. I also give a nod to Rick Irons who maintains a website on such tokens and is doing a revision of Dave S.’s text. My effort will be more compact.

If you are knowledgeable about this admittedly arcane specialty and have any information about unlisted tokens, or ones for which more information has been gathered since 1993, I’d like to hear from you.

I am also doing a new book to succeed my popular American Coin Treasures and Hoards published in 1997. Whitman is the publisher this time around. My gosh, so many treasures have come to light since then — Odyssey Marine Exploration’s gold from the SS Republic, coins found on the wreck of the SS New York, $20 double eagles recently found in California, updating on the SS Central America, and items from many hundreds of sources have gathered since 1997. To this can be added finds by treasure detectorists using Garrett, Fisher, and related equipment. Do you know of some rarities that have been found that way?

If you have any of the above to share, send me an email and I’ll respond. Thank you.