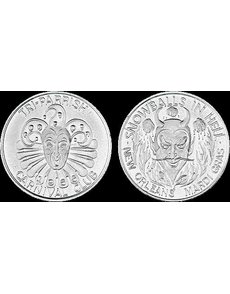 “A snowball’s chance in hell” is an “idiom of improbability,” and is illustrated on a 1966 Mardi Gras doubloon. 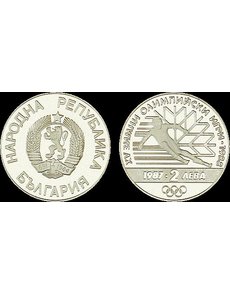 This Bulgarian 1987 Winter Olympic 2-lev coin shows a downhill skier against the backdrop of a giant snowflake. 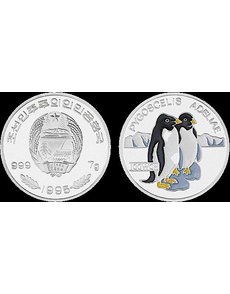 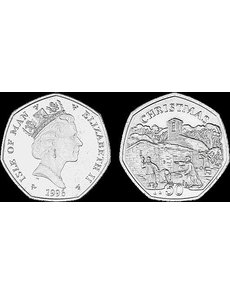 Famous Isle of Man 1996 50-penny coin depicts a snowball fight between choirboys in front of a church on Christmas morning, while a dog looks on. 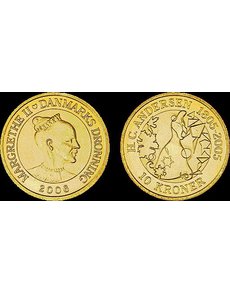 This 2006 Danish 10-krone coin celebrates The Snow Queen, one of the stories of native son and famous author Hans Christian Andersen for the bicentenary of Andersen’s birth. 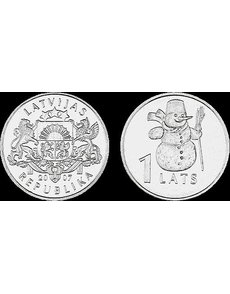 This Latvian 2007 Snowman 1-lats coin is complete with a carrot for a nose. 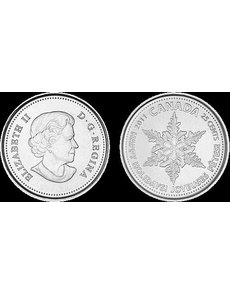 The 2011 Canadian “Happy Holidays!” Snowflake 25-cent coin sold as part of a holiday coin gift set is one of 11 different Snowflake coins issued by Canada since 2006. 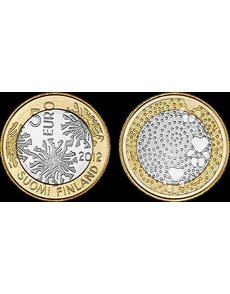 — “Let It Snow” by Sammy Cahn and Jule Styne, 1945
World coins that have snow in some form as a major design element are especially meaningful to collectors (in nations that see snow) because often that first frozen precipitation of the season is what revs the numismatic engine. Among those collectors who are not active year round, the combination of shorter daylight and a white wintry storm draws them irresistibly back to their indoor hobby.
Snow appears on coins in several forms, but only in its most basic form is it symbolic and artistic.
From paper cutouts to silver and crystal, people love to re-create the fragile beauty of snowflakes. A press release from the Royal Canadian Mint for one of its Snowflake coins said, “When it comes to symbols that represent Canada, the snowflake could be a close second to the maple leaf.”
Canada has issued 11 Snowflake coins to date, beginning with gold and silver versions in 2006. In 2011, Canada created the Happy Holidays Snowflake 25-cent coin, the only one not made of precious metal or imbedded with crystals but lovely in its simplicity all the same. It features one snowflake centered on the reverse.
Latvia paid tribute to the internationally beloved snowman in 2007 with a snowman 1-lats coin. At 21 millimeters in diameter, it is not a large coin, so at first glance the figure could be mistaken for a human being by the casual observer, except for something unique to snow people. The generous-sized carrot that serves as the snowman’s nose ensures that everyone will know him for what he is.
Good thinking, Latvia.
There is an art to making a good snowball and many strategies for effective snowball fighting, so, when the Isle of Man issued a 50-penny coin in 1996 depicting a snowball fight, it was an instant hit with a lot of people. The design shows two armies of choirboys outside of a church on Christmas morn exchanging bombs of hand-packed snow while a dog looks on.
Thanks to the Winter Olympics, we have many world coins with snowflake backdrops and snowy trails and slopes that depict athletes enjoying snow sports.
A 1987 Winter Olympics 2-lev commemorative from Bulgaria uses a partial snowflake in the background and a series of straight lines to show the speed at which a skier races downhill during competition.
One-fourth of Finland lies within the Arctic Circle, so snow is very important to the culture of this nation.
In 2012, Finland issued a ringed-bimetallic series of three €5 coins celebrating “Nordic Nature” with a common snowflake obverse and reverses of winter scenes: a landscape, flora and fauna.
The latter cleverly shows, not the arctic fox, but her paw prints in the snow. The use of texture and polishing techniques brings both sides of these coins to life and make a frozen monotone environment visible as well as appealing.
Instead of using texture, North Korea made the snow more apparent on a Proof 1995 silver 100-won coin that was colored at the mint. The white snow-covered mountains of the South Pole in the background are joined by the Adélie penguins of Antarctica that have been colored black, white and orange.
Two famous fairy tales that have the word “snow” in the title and have been commemorated on world coins are Snow White and The Snow Queen.
Snow White, a German fairy tale by the Brothers Grimm, has been honored on coins by France and Germany.
The Snow Queen, a story by Hans Christian Anderson, has been commemorated on coins by the Cook Islands, Belarus and Denmark.
In 2006, Denmark celebrated the bicentenary of the birth of Anderson, its native son, by issuing a 10-krone coin with the Snow Queen on the reverse and Denmark’s real life Queen Margrethe II on the obverse.
In addition to literature, snow is a part of the linguistic culture in every nation where it falls.
“A snowball’s chance in hell” is an “idiom of improbability,” and is illustrated by a clever aluminum Mardi Gras doubloon token. The obverse contains a clown and the legend TRI-PARRISH, 1966 CARNIVAL CLUB; and the reverse shows a devil surrounded by flames and juggling melting snowballs, with the inscription SNOWBALLS IN HELL, NEW ORLEANS MARDI GRAS.