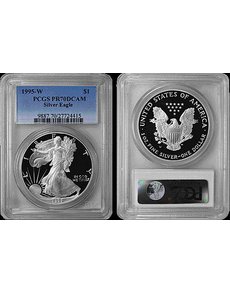 As more Proof 1995-W American Eagle silver dollars are certified Proof 70 Deep Cameo by Professional Coin Grading Services, the supply is increased and prices are falling. This one sold for $55,550 at a Sept. 29 GreatCollections auction.

A key factor may be that the population of “perfect” coins has increased dramatically in the past year. At just 30,125 pieces, the mintage of the issue is extraordinarily low for the series. As of Oct. 3, PCGS has recorded just 19 pieces in the “perfect” grade per population reports posted online at PCGS Coin Facts.

The auction record was set in March when GreatCollections sold another example for $86,655. The lot description noted that just eight were certified by PCGS at that grade level and the holder carried a PCGS “Struck at the West Point Mint” label.

Ian Russell, the firm’s president and founder, said on April 1 that the winning bidder for the March lot was a collector who was not seeking to complete a collection of Proof silver American Eagles. Instead he had waited for years to find a premium example of the rarest date in the entire Proof American Eagle silver series and was willing to “pay what it would take.”

Perhaps spurred on by that record price, on Aug. 21, Westminster Mint’s branch office in Madison, Wis., announced that the firm had sold an example privately for $90,000. The coin went to “a private collector seeking to complete his collection of PCGS certified American Silver Eagles.”

In an accompanying press release, Stephen Pfeil, vice president of Westminster Mint, said, “To set a new record price so soon after the previous record shows the current strength of the market for high-end collector coins and the desirability of this coin.” The press release noted that it was one of just 17 graded as such by PCGS at that time.

Considering that Proof 69 Deep Cameo coins can readily be found at the $4,000 level and that nearly a dozen new PCGS Proof 70 Deep Cameo examples have been certified since March 2013, one can see why buyers would be hesitant to pay nearly six figures for a modern condition rarity.

Especially one that is appearing to become less rare as time goes on. ¦