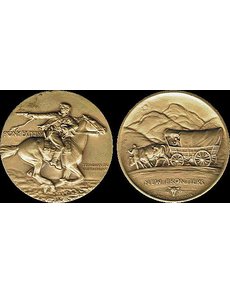 Look familiar? It’s No. 45 in the Society of Medalists series by sculptor James Earle Fraser, designer of the Indian Head 5-cent coin and co-designer of the Oregon Trail Memorial half dollars. The design on the reverse of the medal also appears on the half dollar.Images courtesy of Q. David Bowers.

I continue my comments on numismatic specialties that offer a great amount of pleasure and challenge for a relatively modest expenditure. Today, in 2013, quite a few such areas exist.

For example, Betts medals — a series of several hundred pieces with motifs relating to history of the Americas during the Colonial era — are popular.

Also among my favorite specialty areas are Society of Medalists issues, struck from 1930 through about 1995 comprising 129 designs. For most of the program’s existence, these were produced at the rate of two per year by Medallic Art Co. In the last few years before the series ended in 1995, sometimes only one medal was issued annually.

Typically, sculptors work on commission. Their patrons direct them to create a statue of this person, a plaque of that scene, a memorial motif of something else. The Society of Medalists said, in effect, “create whatever you want to.” Artists had a field day sculpturing designs on topics of their own choice!

The list of artists included America’s most famous, and among them some who also designed coins — Robert I. Aitken, Anthony De Francisci, Laura Gardin Fraser, James Earle Fraser, Hermon A. MacNeil, Henry Kreis, Gertrude K. Lathrop, Brenda Putnam, Adolph A. Weinman, Robert A. Weinman and Chester Beach being examples. Among modern sculptors, the remarkably talented Alex Shagin, who did a medal of me for the American Numismatic Society in 2006, is on the roster.

Usually measuring about 72 millimeters, each medal was struck in bronze and silver versions. I prefer the artistic aspects of bronze and have collected these.

Today, bronze examples are apt to sell for from less than $100 up to perhaps $200 or a bit more, depending on the popularity of the design. A nice display of these medals is in effect an art museum in your own home!