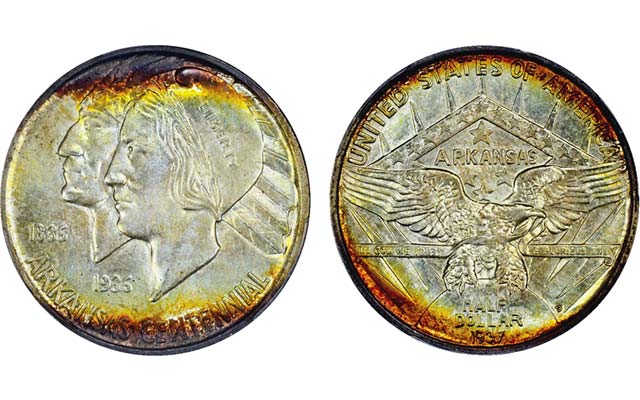 While some prefer untoned coins, the charms of this MS-67 CAC 1937-D Arkansas Centennial commemorative half dollar with rich bands of toning attracted a bidder who paid $2,820 for it on April 24.

Especially for Mint State and Proof coins, eye appeal is an essential component of a coin’s grade. Grading services like Professional Coin Grading Service have informal ranges that they use to evaluate toning from amazing — for a coin that screams “Wow!” — to neutral for average coins, to ugly for unfortunately toned pieces. Great toning may elevate the grade of a coin by a grade point, just as ugly toning may take a point or two off. Here are three handsome half dollars from Heritage’s recent Central States Numismatic Society auctions. How would you evaluate the toning on these?

1936 marked the 100th anniversary of Arkansas becoming a state. To commemorate this, half dollars were struck at the Philadelphia, Denver and San Francisco Mints between 1935 and 1939. Today, collectors consider the side with the profiles of a Native American and a young American woman to be the obverse, although at the time the coins were issued it was considered the reverse. There are 15 separate coins in the series, making it either an exhausting or a fun collecting challenge, depending on one’s perspective.