Are stories fact or fiction? 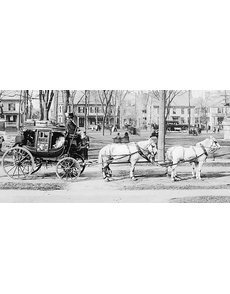 A particular Concord Coach in use. Was it carrying commemorative coins?

Of the three, two are partly fictional and one is real. See if you can find the real story. Don’t feel bad if you do not, as participants in the popular NPR program often don’t either!

No. 1: In 1921, Gov. Bixby of Alabama learned a lot of money could be made by ordering commemorative half dollars for face value from the Mint and selling them at a profit. What to commemorate? The centennial of the state had already passed, in 1919. Bixby wrote to President Warren G. Harding (the two had a slight acquaintance, having met in a fishing derby in the Gulf of Mexico), who referred him to Secretary of the Interior Albert Fall, who told the governor that for a private payment of $1,000 cash he could arrange a commemorative of any design desired. This was done, and an Alabama coin was issued showing a motif of cotton, sugar, rice, and tobacco — products of that state. Offered at $2 each, 14,522 were sold in the first three weeks of their announcement.

No. 2: In the 1930s, C. Frank Dunn was in charge of arranging, ordering, and selling Daniel Boone Bicentennial commemorative half dollars. He had rarities created, set his own prices, and did the marketing. After an initial 1934 minting, in the autumn of 1935, he ordered 1935 coins, but with a small “1934” added to the reverse of some. Offered at $3.70 per pair in November 1935, the coins were presented to collectors who had no choice but to buy them to have their collections be complete. Dunn distributed only a few, claimed he was “sold out,” but later offered them for $40 and more per pair. In face of lawsuits, it is said that he had title to his property transferred to his wife.

No. 3: Fort Vancouver in Washington state desired to commemorate its centennial in 1925. After congressional authorization of a half dollar, a motif was created featuring the fort as it appeared in 1825 and the portrait of T.D. Seaman, fort commander. Dies were prepared by Laura Gardin Fraser, S Mint marks were added, and they were shipped to San Francisco. After the mintage of 18,000 was accomplished, the commemoratives were packed into 1,000-coin bags and delivered by a team of four white horses hauling a Concord Coach (borrowed from the Wells Fargo National Bank). Offered at $1 each, about 11,000 were sold right away. Later, the committee wholesaled the rest to B. Max Mehl at 80 cents each.

The Concord Coach depicted at the top of the column was part of a municipal parade in Claremont, N.H., in the early 20th century and had nothing to do with coins.