Are coins undervalued as an asset class? 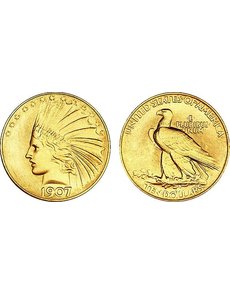 This 1907 Indian Head, Normal Rim gold eagle, once the property of Mint Director Frank A. Leach, sold for $2.185 million in January. What will the coin be worth in 10 years?

In early June, several coin dealers wrote blogs that compared the coin market to the art market — a topic that seems to come up every few years.

To be sure, the overall coin market is small compared with the global art market, although the frequency of $1 million coins trading hands has increased rapidly over the past decade.

On May 29, Laurie Sperber of Legend Numismatics wrote that when compared to other asset classes like art, gems or watches, coins “are so cheap relative to other ‘collectable’ areas it seems like they are forever ‘on sale.’ ” Sperber cited the 1907 Indian Head, Normal Edge gold $10 eagle graded Proof 67 by Numismatic Guaranty Corp. that she purchased from the 2011 Florida United Numismatists Heritage Auction for $2.185 million as an example of a coin with broad appeal. She predicted that the beautiful coin, with a historic provenance that traced its ownership to a former Mint director, could easily be worth $15 million in 10 years.

Prices for the rarest objects across most collectible categories have increased in the past decade as billionaires — especially from Russia and China — have sought to diversify their portfolios with alternative investments like collectibles that speak to a buyer’s taste and status.

Dealer Doug Winter asked in a June 1 blog entry to his site if the coin market will ever “catch up” to the art market. He argues that the pool of buyers for a fine art masterpiece is far broader than for a rare coin  like a 1913 Liberty Head 5-cent piece. Most great U.S. coins are marketed to American coin buyers, while the market for ancient art or a Picasso painting is global.

The coin market has few institutional buyers like museums that can permanently remove items from the market. While museums will deaccession (sell) minor works, they rarely sell major works to nonmuseum buyers on the open market. Thankfully, at least a dozen museums have large acquisition budgets or wealthy trustees who can come up with substantial amounts for a masterwork that fills a gap in a collection, so the supply of great paintings is always shrinking.

A limiting factor for coins is that they don’t display well to noncollectors. Winter gets to the point by asking, “When’s the last time you went to your local museum to see a coin exhibit?”

Coins cannot adorn as gems or watches can, cannot decorate as antiques and art can, and don’t look cool in a garage like a classic car. Yet, they are portable and the transaction costs of selling most coins is substantially less than with other rare objects.

So are rare coins cheap, somewhat undervalued or overvalued? ¦