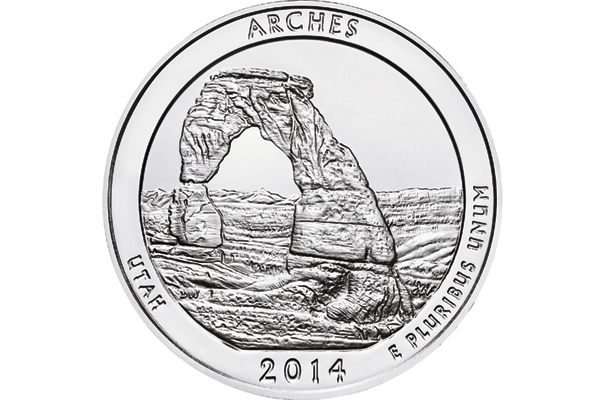 The reverse of the 2014 Arches National Park quarter dollar depicts Delicate Arch, a 65-foot freestanding natural arch. The La Sal Mountains are off in the distance.

The official launch ceremony for the 2014 Arches National Park quarter dollar is scheduled for June 6, three days before the coins are released into general circulation through the Federal Reserve.

The circulation-quality coins will also be available from the U.S. Mint in bags and rolls on June 9.

The 9 a.m. Mountain Time June 6 ceremony is scheduled to be held at the Arches National Park Visitor Center on U.S. Highway 191 in Moab, Utah.

Immediately following the ceremony, the public will be able to exchange cash for $10 face value rolls of the 2014-D quarter dollars. There is a minimum one-roll minimum and 10-roll maximum. Each roll contains 40 coins.

The roll exchange is being handled by Zions Bank Moab Financial Center.

At 5:30 p.m. Mountain Time June 5, the U.S. Mint will host a coin forum at the Zions Bank Moab Financial Center, 330 S. Main St., in Moab. The purpose of the meeting is to inform the public on U.S. Mint coin programs and receive input from the public.