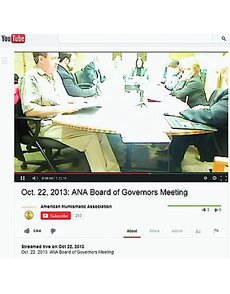 The American Numismatic Association Board of Governors voted to hold its 2017 World’s Fair of Money in Denver.

The board selected Denver during its open session board meeting in Colorado Springs, Colo., at the ANA’s headquarters on Oct. 22.

Cities considered for the 2017 convention were Atlanta, Baltimore, Chicago/Rosemont, Denver, Philadelphia and Washington, D.C. The show was in Rosemont, Ill., in 2011, Philadelphia in 2012 and Rosemont in 2013, and is scheduled in Rosemont again in 2014 and 2015. In 2016 the convention will be held in Anaheim, Calif.

Waiting for a budget

The budget for the 2013–2014 fiscal year — which was scheduled to be passed during the open session — was the source of lengthy debate and discussion during the executive session held the previous day.

At the open session, ANA President Walter Ostromecki said that at this point the board is not ready to vote on a budget, adding, “We are looking at what’s in the best interest of the association and you, the membership.”

ANA treasurer Larry Baber noted after the meeting that the ANA’s projected revenue for the 2013–2014 fiscal year may be lower than first thought and that the board would take the next three months to study the budget.

The board approved a revised museum collection management policy, which Jake Sherlock, the ANA’s Marketing and Communications director, said “was simply a formal adoption of the collection management policy that the museum has operated under for the past nine years.” He said that the policy will be for internal use only and will not be made public, “because it includes information about museum security.”

The part of the policy read at the open session involved proceeds from deaccessioned museum items. Under the policy, funds received from the sale of deaccessioned objects will be designated and placed in the museum collections fund, and will used for the acquisition of new objects or used for storage, conservation, maintenance or cataloging needs.

Other topics discussed addressed expanding the ANA’s outreach. Joint show promotion for the ANA’s 2014 World’s Fair of Money in Rosemont and the 2014 Royal Canadian Numismatic Association convention in Toronto was considered, as was the potential for collaborating with the United States Mint to include ANA membership information in U.S. Mint mailings and on the Mint website, www.usmint.gov.

Perhaps the most robust discussion involved board elections; specifically how to attract a board with a strong business management skill-set and if qualifications should be set for board candidates.

To that end, ANA legal counsel Hollie Wieland presented an option in which a committee would appoint individuals with specific expertise in fields like finance, numismatics, law or business that would form a board.

Ostromecki then referred to efforts in 2005 by former executive director Christopher Cipoletti to move the board away from direct membership elections, saying that a committee-selected board may not go over well with the ANA membership.

The meeting was noteworthy in that it was the first ANA Board meeting broadcast live on YouTube, with the meeting immediately posted upon its completion to the ANA’s YouTube channel at www.youtube.com/American Numismatic. It was noted at the meeting that as many as 30 computers were watching the meeting live as it streamed on YouTube. ¦