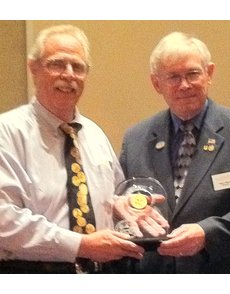 He received the award Aug. 19 during the ANA World’s Fair of Money in Chicago.
The Farran Zerbe Memorial Award is the highest honor the ANA confers, and recognizes numerous years of outstanding, dedicated service to numismatics.
A Brooklyn, N.Y., native, Terranova began collecting as a teen, collecting classic U.S. series such as Indian Head 5-cent coins, Walking Liberty half dollars and Morgan dollars, but found himself particularly drawn to Colonial and early U.S. coinage. This interest eventually led to Terranova becoming a coin dealer in the mid-1970s
.
As a specialist in early American coins, Terranova is often called upon by the numismatic community to examine rare pieces.
Terranova is among the professional numismatists who have researched and examined some of the most intriguing and legendary coins of the past few decades, including the King of Siam Proof set, the Bank of New York Fugio cent hoard, a 1792 Flowing Hair experimental cent, two previously unrecorded 1792 silver quarter dollar patterns, a chisel-marked copper 1792 disme, a previously unknown die variety of 1787 Fugio cent, and most recently a rare undated New York copper classified as Breen 1001 (Walter Breen’s Complete Encyclopedia of U.S. and Colonial Coins).
Terranova is also responsible for the discovery of a unique 1792 Silver Center, No Silver Plug cent pattern.
According to an article appearing in The Numismatist, the ANA monthly journal, Terranova himself never stops learning and considers himself fortunate to earn a living doing what he loves. “I made my avocation my vocation,” he says. “If I can buy and sell anything that’s related to Early American history, I’m happy. That’s my favorite stuff.”
As a youth, Terranova was a frequent visitor to many of the coin shops in New York City. In the article announcing the award to Terranova appearing in The Numismatist, the collector and dealer is quoted as saying, “There were about 60 coin stores in New York City. If you consider the various boroughs, there were probably even more. Manhattan alone had 25 or 30.” The number of stores fell, however, their owners driven out of business by rising rental fees for the buildings in which they operated. According to the ANA, Terranova said, “Now there’s only two coin shops left on the whole island of Manhattan — Brigandi Coin Company and Stack’s [now Stack’s Bowers Galleries].”
According to the ANA, Terranova had been “intimidated” by Stack’s as a youth, but once he became a professional numismatist, “Stack’s became one of my favorite customers.”
Stack’s even figured into his personal life. He met his wife, Mary, at a lot viewing for a Stack’s auction in 1983, where she was examining Colonial coins, according to the ANA. They have been married for 26 years and have a son, Anthony Jr.
According to the ANA, Terranova, in addition to being a life member of the ANA, is also a life fellow of the American Numismatic Society, which is headquartered in Manhattan. Terranova also is a member of the New York Numismatic Club. “I attend meetings every chance I get. Everybody brings items to display and talks about their stuff. It’s great,” he said, according to the ANA. “Their interests are very eclectic — primarily ancients, but also tokens, medals, fractional currency, paper money … all kinds of topics.”
Terranova was awarded the Professional Numismatists Guild’s Lifetime Achievement Award in 2006. ¦