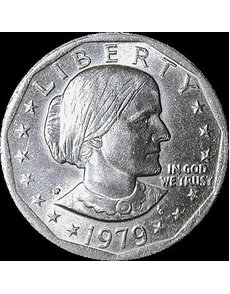 When checking out rolls of mixed dollar coins, pay attention to the obverse of 1979-P Anthony dollars. This coin is an example of the scarce 1979-P Anthony, Wide Rim, Near Date dollar subtype. 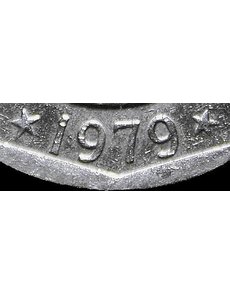 Here is a close-up of the date and rim area of a scarce 1979-P Anthony, Wide Rim, Near Date dollar. 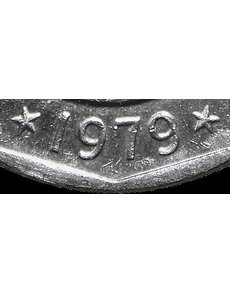 The date and rim area of a common 1979-P Anthony, Narrow Rim, Far Date dollar subtype is shown in this close-up photograph.

What may be some of the most underwhelming coins ever minted for circulation in the United States, the Anthony dollar series offers any roll searcher the chance to add a valuable coin to a collection.

When discovered among other modern dollar coins from a local bank, 1979-P Anthony dollars in particular should be examined to identify a very easily distinguishable design feature: the coin’s obverse rim!

In 1979, the Philadelphia Mint version of Anthony dollars featured a rim that was not as robust as the modified rim used on the coins issued much later in that year and then as a part of the design for subsequently dated issues of these coins.

So, coins struck earlier in 1979 by the Philadelphia Mint and with the P mint mark are the common version known as the “Narrow Rim” or “Far Date” variant or subtype.

On this variant, the border around the rim is thinner and the coin’s date appears to be farther from the rim. This is not the scarce variant.

The later struck and difficult to find variant of 1979-P Anthony dollar is known as the “Wide Rim” or “Near Date” coin. These coins feature a modified wider rim and a date that appears to be closer to the rim. This is the scarce version!

Just remember that the 1979-P Anthony dollar with the date closer to the rim is the tough one to find. The images included in this column should help you identify this variety with ease.

While searching through rolls of mixed, small dollar coins, I was lucky enough to hit a nice pocket of Anthony dollars, or SBAs as they are sometimes called.