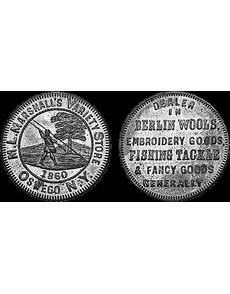 Morgan L. Marshall’s pictorial store card depicts a fly-fisherman. Marshall made and sold fishing equipment. The store cards of this merchant have been favorites of the author’s since he was in high school.

Morgan L. “Blunt” Marshall’s antebellum store card has been a favorite of mine for many years.

Marshall operated a general store in central New York state, dealt in coins and was an avid outdoorsman. He was a member of the New York National Guard, and actively involved in recruiting during the Civil War. He served several terms as town alderman.

His net worth in the 1860 census was stated at $4,000. In the fall of 1860, Marshall sold the coin collection of future American Numismatic Association Secretary George Rice’s father. The war years were good to this manufacturer of fly-fishing rods. In 1870, his net worth had risen to $14,000.

By then he had retired as a “merchant of fishing tackle.” Marshall then went into local Democratic Party politics, and sold his business in 1878. He died in 1883.

I became acquainted with Marshall’s exonumia while a high-school student. I became enamored with Civil War tokens during the sesquicentennial of 1961 to 1965. The Fulds, George and Melvin, listed Marshall as New York store card issuer NY695 in their 1962 pioneering work, A Guide to Civil War Store Card Tokens. As I was born and reared in upstate New York, store cards of my area quickly became my interest. Marshall’s inexpensive pictorial token in copper (Fuld NY 695A-2a) was one of my first acquisitions.

I thought it a real coup. Dated 1863, the cent-sized token depicted a fish and advertised his store located in Oswego, N.Y. This Lake Ontario community was only 40 miles from my home in North Syracuse! And my grandparents had a camp in Oswego County where I spent summers fishing.

This token actually depicted a fisherman with a fly rod and reel, in a lovely circular vignette, while advertising his endeavors.

What was even more interesting to me was that my century-old store card was in unimprovable prooflike condition, and in white metal, a soft composition of lead and tin favored by 19th century medalists because it struck up so exquisitely. I later learned that Marshall donated copper, brass, and white metal examples of his 1860 store card to the New York State Library in Albany in 1861.

Donald Miller listed my store card as NY1010 in his A Catalogue of U.S. Store Cards or Merchant Tokens. When dealer Joe Levine sold my piece in a 2003 auction, it brought $66.