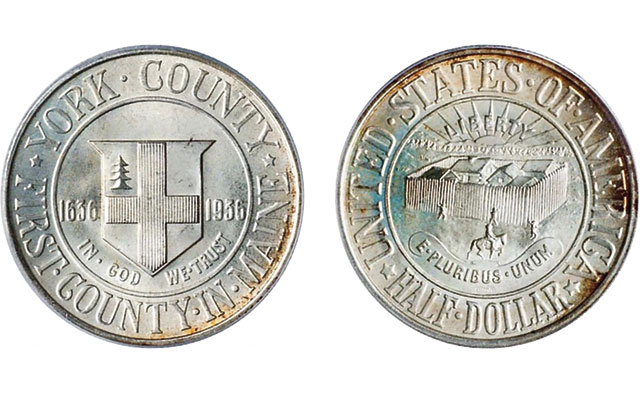 With a mintage of only 25,015 pieces, a Mint State 1936 York County, Maine, Tercentenary half dollar seemed like a prized rarity to naïve investors a quarter century ago.

Last week I posed some questions. Here are the answers:

Q: Why weren’t all 1921 silver dollars of the Peace design?

A: Under the Pittman Act of 1918 hundreds of millions of long-stored dollars were melted. In 1921, a hurry-up call was issued for more, to back silver certificates. The new Peace design was not ready, so the old Morgan motifs were dusted off.

Q: Why in August of 1909 did the Treasury Department suddenly cancel the production of Lincoln cents with V.D.B. on the reverse?

A: Some (not many) complaints reached the government to the effect that sculptor Victor D. Brenner had been paid for his work, so why advertise his initials?

Q: Why is Sylvester S. Crosby important in American numismatics?

A: His Early Coins of America, published in 1875, is still essential in a numismatic library in 2014.

Q: Why today are some gem Mint State coins worth fractions of the value they commanded in 1989?

A: Countless millions were sold to “Wall Street” investors, multiplying the prices of some. When such investors disappeared, prices fell.

Q: Why were copper-nickel 5-cent coins introduced in 1866 when we already had half dimes since 1792?

A: Due to public hoarding no silver coins were in commerce in the East and Midwest from spring 1862 until 1876. The “nickel” filled the gap.

Q: Why does the popular coin grading system stop at 70?

A: Dr. William H. Sheldon in 1949 devised it as part of a mathematical formula to calculate the market value of copper cents of 1793 to 1814. The formula failed miserably, but collectors liked the “precision” of numbers, and we still use his figures.

Q: Why in 1883 did the San Francisco Mint strike exactly $1 million face value in coins for Hawaii?

A: Hawaiian sugar king Claus Spreckels ordered them for commerce in the islands.

Q: Why during World War II did the Treasury issue paper money of regular design, but imprinted with the word HAWAII?

A: If Hawaii fell into the hands of the Japanese the Treasury could declare the HAWAII notes no longer being legal tender.

Q: As 1922 “Plain” cents are simply poorly struck 1922-D Lincoln cents with the Mint mark not visible, why are they so valuable?

A: Because the Philadelphia Mint made no cents that year, and poorly struck 1922-D cents provided an alternative (don’t ask about logic).

A: At the time of mintage, probably fewer than 50,000 1881-CC dollars were released. Others were stored by the Treasury Department and released many years later, including 147,485 Uncirculated pieces that were sold through the General Services Administration beginning in the early 1970s and ending in 1980. In contrast, nearly all 1886-O Morgan dollars were put into circulation in the 19th century at a time when no numismatist is known to have collected coins by Mint marks.