ANS today is a bastion of research and scholarship 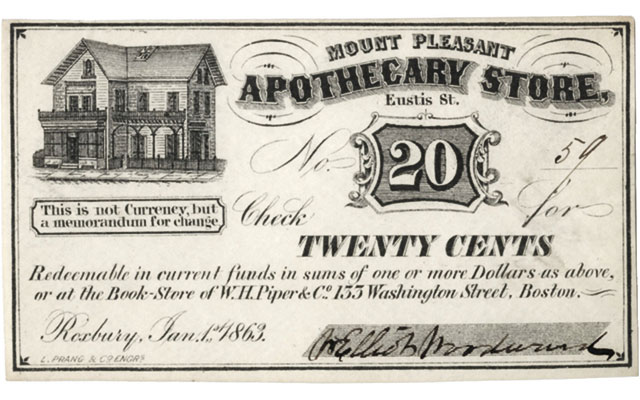 W. Elliot Woodward signed and issued this scrip note for his Mount Pleasant Apothecary Store, where his rare coin business was located.

The American Numismatic Society, founded in March 1858, was dynamic through 1859, when it simply disappeared — for reasons unknown today. It had a rebirth of sorts in an unrelated group, the American Numismatic and Archaeological Society, organized in 1864 with different people involved. Today, the ANS, located in New York City, is a bastion for research and scholarship.

In the 1860s, other coin clubs also held regular meetings and in some instances issued bulletins.

In 1860 and 1861, the hottest tickets in the marketplace were tokens and medals depicting George Washington. Other favorite series included Colonial coins, Continental currency, half cents and cents from 1793 to 1857, patterns, early silver coins and, for those who could afford such pieces, gold coins from 1795 to 1834. No one collected Mint-marked coins, and not even the Mint Cabinet sought to acquire them (but did have a stray few, such as a Proof 1854-S Coronet double eagle sent from the San Francisco Mint).

Mintages of Proof coins fell during the Civil War. Uncle Sam would not accept legal tender notes at par, so collectors desiring silver and gold Proof coins had to either pay a sharp premium to buy them or else acquire silver and gold coins from a broker and send those for payment for the Proof coins.

Coin auctions, launched on a regular basis in 1859, became common events in the early 1860s. The two leading catalogers were Edward D. Cogan, a Philadelphia dealer in art goods, who started by having a mail-bid sale in 1858, and W. Elliot Woodward, owner of the Mount Pleasant Apothecary Store in Roxbury, Mass.

Cogan had a large ego and held himself out as the “father of the rare coin business in America” (never mind that John Allan was in the trade in New York City in 1820 and many others were professionals prior to Cogan). His catalogs contained many important coins, but little in the way of scholarship.

In contrast, Woodward was a consummate student of American history, possessed a large library, and was familiar with many intricacies of numismatics. His catalogs stand as important references today.

Usually, the sales were held in commercial auction rooms and conducted by a professional auctioneer, not the writer of the catalog. Such auction firms usually sold other things as well.

The rare coin market was very strong, and new faces arrived in a constant stream.