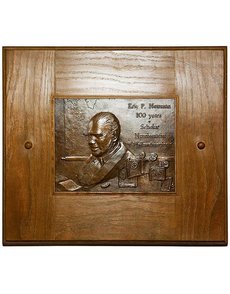 The American Numismatic Society presented a portrait plaque to Eric P. Newman in honor of his 100th birthday. Newman’s portrait is surrounded by images of books and numismatic objects related to his research. The map of the world behind Newman’s portrait represents his love of travel. The plaque is framed in red oak. 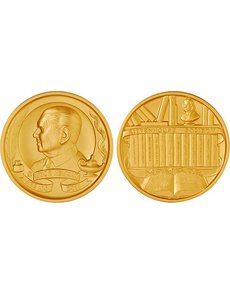 A portrait of Eric P. Newman appears on the face of the gold medal presented to him by the Rittenhouse Society to mark his 100th birthday. The back design lists the names of the 13 books Newman has written.

Images courtesy of The Rittenhouse Society.

Family and friends gathered in New York City May 29th to celebrate Eric P. Newman’s 100th birthday. The Newman family was in New York City for a family gathering Memorial Day weekend, during which two medal presentations were made.

The Rittenhouse Society, of which Newman is a founding member, presented him with a gold medal bearing his likeness.

The society commissioned sculptor Luigi Badia, a member of the National Sculpture Society, to execute obverse and reverse models of the medal, which was struck by Medallic Art Co. in Dayton, Nev.

The obverse features Newman’s portrait flanked by images of a quill pen and a lamp of knowledge, emblematic of the numismatic knowledge he has provided to the numismatic field.

The portrait faces left as if the subject is looking into the past, symbolic both of his writings on coins and paper money of early America and his prominent position in the field as a numismatic author and historian.

A ribbon on the obverse bears Newman’s name and carries over on the reverse containing the inscription rittenhouse society member.

The reverse bears representations of 13 books Newman has written, with shortened versions of the names of the books on the spines. The books are arranged on two shelves with a tiny bust of David Rittenhouse on the top shelf and an image of Rittenhouse on an open book below.

Newman is a charter member of the private, invitation-only Rittenhouse Society formed in 1960 by admirers of David Rittenhouse, a scientist and scholar who served as the first director of the United States Mint.

The Newman family chose the reverse theme of books. Wayne Homren, Rittenhouse member and editor of the online newsletter E-Sylum, published by the Numismatic Bibliomania Society, provided all 13 books from his library to the artist to be modeled for the reverse design.

The reverse was designed by Joel Iskowitz, an artist of more than a dozen coins and medals, both for the U.S. Mint and private commissions. D. Wayne Johnson, one of the founders of the Rittenhouse Society, oversaw the Newman medal project.

Rittenhouse Society members meet once a year at the summer ANA convention and encourage the publication of numismatic literature.

The American Numismatic Society also recognized Newman’s May 25th birthday and his many contributions to the ANS with a bas-relief portrait plaque.

The plaque was presented to Newman by ANS Chairman Kenneth L. Edlow during festivities May 29. Newman is a trustee emeritus and benefactor of the ANS.

The ANS commissioned sculptor Amy Kann of Philadelphia to create a medal as part of its celebration of Newman’s contributions to numismatics and the ANS. The portrait of Newman is surrounded by images of books and numismatic objects related to his research. The map of the world behind him represents his love of travel. The plaque is framed in red oak by sculptor Stephen C. Layne of Philadelphia.

A limited edition bronze medal will feature the bas-relief image of Newman on the obverse and a depiction of Newman in his library on the reverse. Information on purchasing the medal will be released this summer.

Newman served on the ANS Council (Board of Trustees) from 1962 to 2003, when he was named honorary trustee. The ANS presented its highest honor to Newman in 1978, the Archer M. Huntington Medal, in recognition of outstanding career contributions to numismatic scholarship.

Newman has served the ANS in many ways including in the early 1990s being instrumental in the return of dozens of rare U.S. large cent pieces stolen from the ANS Collection by Dr. William H. Sheldon circa 1949.

As a leading proponent of education, for nearly every year between 1969 and 1999, Newman participated as a lecturer in the ANS Graduate Summer Seminar.

In 1981, he also took responsibility for supporting the program financially, providing a yearly grant of $10,000; in 1996 to 1999, he fully endowed it. The program has been named in his honor: the Eric P. Newman Graduate Summer Seminar. ¦