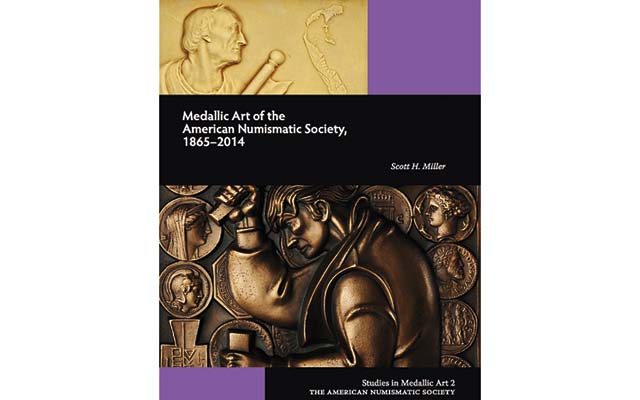 The American Numismatic Society is offering a new reference illustrating medallic art in the ANS collection.

The following news release was issued June 22 by the American Numismatic Society:

New York, NY – The American Numismatic Society (ANS) is proud to now offer a new and much anticipated publication for sale, Medallic Art of the American Numismatic Society, 1865-2014, Studies in Medallic Art 2. The hardcover book, by Scott H. Miller, includes 60 medals issued by the ANS, two COAC medals and the 1910 Actors’ Fund Medal, all accompanied by color photographs.

Many of the entries are supplemented with artist sketches, archival photographs, and corresponding stories. Also included are four appendixes, which note recipients of some of the medals and contain a list of dies, hubs, galvanos and casts of ANS medals in the ANS’s own collection.

Commenting on the new book, Andrew Reinhard, Director of Publications, said “The ANS has been a leader in the publication of art medals in the U.S. for the past 150 years. The issuance of medals has been at the forefront of the ANS mission since its inception, as they are as important as coinage in terms of history and beauty. Working with Scott Miller to produce the book was a rewarding experience, and we are all very happy that it is now available to the public.”

The American Numismatic Society (http://www.numismatics.org), organized in 1858 and incorporated in 1865 in New York State, operates as a research museum under Section 501(c)(3) of the Internal Revenue Code and is recognized as a publicly supported organization under section 170(b)(1)(A)(vi) as confirmed on November 1, 1970.