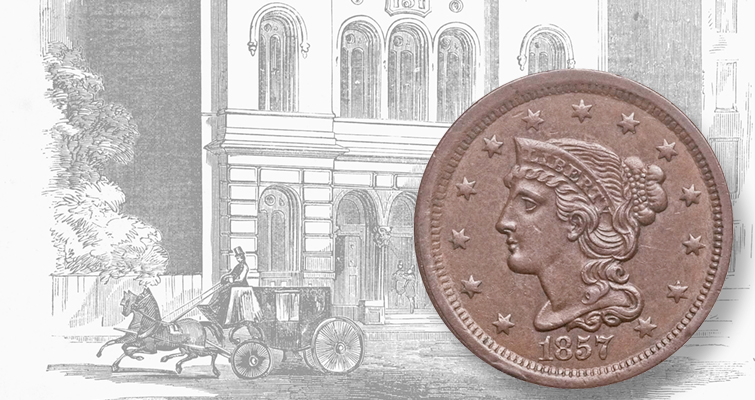 The Astor Library in New York City was the site of some of the first “coin club” meetings in America.

The Joys of Collecting column from the March 28, 2016, Weekly issue of Coin World:

Formed in 1858, the American Numismatic Society, today in its headquarters on Varick Street in New York City, has one of the largest numismatic libraries in the world and one of the very finest coin, token and medal collections.

ANS membership is open to everyone and information can be found online at Numismatics.org.

The world of collecting in 1858 is difficult to imagine today. There were no books at all on American numismatics. There were no grading standards at all. And in 1858 there was not a single auction with notable numismatic material. There were no periodicals devoted to the subject.

Sage and other enthusiasts around the country, probably numbering in the thousands, were more or less on their own. Most collectors were casual at best. When in 1857 the government stopped making large copper cents, a wave of nostalgia swept across the land, and many sought to get at least one each of as many dates of “pennies” as they could find.

As to the number of serious collectors in 1858, in that year the Mint sold 210 silver Proof sets (3-cent piece to dollar), perhaps suggesting a population of up to 500 dedicated aficionados, as current coins were not everyone’s cup of tea.

There were a half dozen or more coin dealers scattered in Baltimore, Philadelphia, New York City, and Boston. On their own, coins could not generate enough revenue to sustain a business, so nearly everyone also dealt in other things as well — such as prints, fossils, Indian artifacts, and autographs. Sales and correspondence were done by mail, the delivery of which to most Eastern towns and cities was as fast as it is in 2016.

In New York City, the Astor Library was a coin club of sorts.

About the year 1856, Augustus B. Sage met Daniel W. Fiske, who at the time was an assistant librarian there. Frank H. Norton, a knowledgeable historian, was a frequent visitor as well, as were a dozen or so others. There were several shelves of coin books on hand, all dealing with foreign and ancient issues. There was so much to learn! To collect and enjoy, it was necessary find out about grading, rarity, history, and the reputation of others in the hobby. Values were important. After all, a nice 1793 cent could be worth $5, while an 1857 cent had no premium.