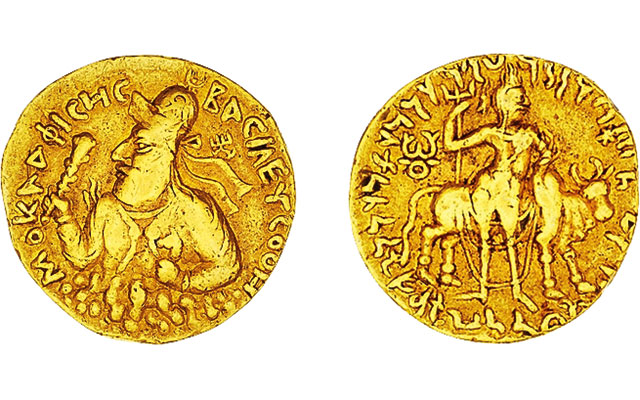 The ANS has a representative collection of Kushan coins, including this gold double dinara from 113 to 127 A.D.

The American Numismatic Society expects the American Journal of Numismatics, volume 26, to be published this spring. It includes articles by 11 authors on topics ranging from the last Seleucids in Phoenicia to an 18th century coin hoard from Sicily.

Also coming this spring is the new book Medallic Art of the American Numismatic Society, 1865–2014 (Studies in Medallic Art 2), by Scott H. Miller. It is the first comprehensive monograph in a hundred years on the medals issued by the ANS and includes 60 medals produced by the ANS or endorsed by the ANS.

The ANS has an established history in medallic art, and the book’s description states, “With the exception of the United States Mint, no U.S. entity can boast so long and distinguished a contribution in this area. Founded in 1858, the American Numismatic and Archaeological Society, as it was known from 1864-1907, believed the issuance of medals to be a part of its mission from the earliest years of its existence.”

Also available for pre-order is Kushan, Kushano-Sasanian, and Kidarite Coins: A Catalogue of Coins from the American Numismatic Society by David Jongeward and Joe Cribb, with Peter Donovan.

The authors explain, “The Kushan Empire was a vast inland empire that stretched across Central and South Asia during the first to fourth centuries AD. The origins of Kushan dynasty continue to be debated, and precise dates, especially for the late Kushan kings, remain elusive, but the coinage reveals the Kushan dynasty as a major force in the cultural and political history of the ancient Silk Road.”

The 414 page book is intended to be a tool for scholars and collectors alike for understanding, identifying, and attributing these fascinating coins that represent four centuries of Central and South Asian ancient history. It will also be available this spring for $150, with a member price of $105.

For more information, contact the ANS at 75 Varick Street, floor 11, New York, NY 10013, call the organization at 212-571-4470 or contact Andrew Reinhard, the ANS Director of Publications, at areinhard@numismatics.org.