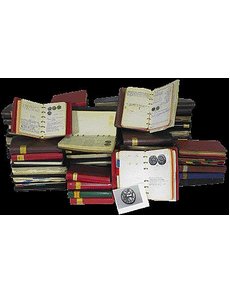 Rare hobby literature and research have found new homes at America’s top two numismatic institutions and will now be accessible to researchers and the public.

The materials acquired on behalf of both institutions are several important items once owned by Vladimir and Elvira Clain-Stefanelli, who served as co-curators at the Smithsonian Institution of the National Numismatic Collection from 1957 until 1982. Elvira Clain-Stefanelli became curator upon her husband’s death and served in that role until retiring in 2000.

Joining the ANS library are Vladimir Clain-Stefanelli’s extensive manuscript and typescript materials, with photographs and additional publications, on the coinage of Callatis in Greece.

According to the ANS, this largely unpublished body of work is a valuable research tool for Greek numismatic scholars with particular interest in Greek colonies of the Black Sea region. The lot sold for a hammer price of $2,200.

In addition, joining the ANS library is a group of 77 binders and scrapbooks containing thousands of pages of notes with coin photos or drawings, including Elvira Clain-Stefanelli’s notebooks on Roman Republican coins. Forty-one small binders hold thousands of pages of handwritten notes, divided by region (from Acarnania to Zankle); 10 small binders highlight Roman Republican denarii. This lot sold for a hammer price of $5,500.

The duo’s research on American medals and foreign medals relating to America, particularly the Comitia Americana series, will also join the ANS library; the research (which sold for $20,000 hammer) offers hundreds of pages of photocopied articles, original photographs, manuscript notes and other research.

The ANA Library will be receiving Clain-Stefanellis’ assemblage of materials about the United States Assay Office gold controversy, which includes copies of various expert reports about the Franklin Hoard of USAO gold coins, purportedly found in Arizona in the 1950s but that some experts claim are fake. The research sold for a hammer price of $9,500.

Elvira Clain-Stefanelli’s original typescript of Numismatics — An Ancient Science (sold for a hammer price of $650), and the working draft for the book Beauty and Lore of Coins, Currency and Medals by both Clain-Stefanellis (hammer price, $250) are also among the donations to the ANA.

Both institutions are receiving other research material from the sale.

The ANS collection will include 42 issues of Bicknell’s Reporter, Counterfeit Detector, and General Prices Current, which were published in Philadelphia. The periodicals in the acquisition were published from April 20, 1847, to Feb. 15, 1848, and join only three other examples in the ANS library, none of which were among the grouping in the auction, which sold for $1,600 hammer.

Being donated to the ANA is William Sheldon’s personal copy of his book Early American Cents, with condition census updates and other annotations. Sheldon’s book will be placed into the ANA’s rare book room, which includes a first edition copy of Early American Cents that was annotated by Walter Breen and once was part of the John J. Ford Jr. library.

As of Jan. 23, neither museum had received the items, which were in transit.

The other items being donated to the ANA will join the library archives. After being cataloged, the materials will be available for researchers at the library and at some future time may be featured as part of the mobile archives at ANA conventions and regional shows around the country. Even later, the ANA may make the archives available on its website.

ANS Librarian Elizabeth Hahn said the materials being donated to the ANS will be made available to researchers as soon as they are properly cataloged. The Clain-Stefanelli materials will all go into the ANS archives and will be listed in the online archive catalog, ARCHER.

Both institutions offered thanks for donors that made the purchases.

Manley won and donated the items to the ANA library, according to the ANA. Manley “has been a driving force behind adding historically significant items to the library’s collection for the benefit of all ANA members and collectors,” according to RyAnne Scott, marketing and communications manager at the ANA.

For information about the ANS, visit www.numismatics.org or telephone the ANS at 212-571-4470.