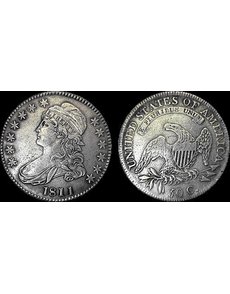 Chinese-struck counterfeit 1811 Bust half dollar has reverse of an 1809 variety and an 1820s obverse that has had the date altered on the fake die to an 1811. 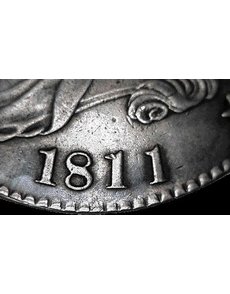 The spacing of the date digits does not match up with any genuine 1811 half dollar. 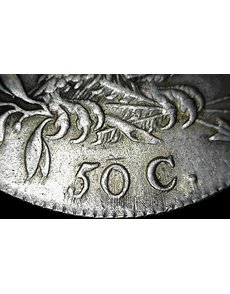 On the reverse of this fake, notice the extra metal filling the tops of the 5 and the 0 in 50 C.

This month’s counterfeit is an 1811 Capped Bust half dollar that has the surface texture and overall appearance typical of a die-struck fake from China. It is a reasonably deceptive counterfeit, but on close examination enough diagnostics exist on the coin for the average collector to spot it.

The weight of the coin is accurate, 13.35 grams — a genuine Capped Bust half dollar weighs 13.48 grams when first struck. The loss of a tenth of a gram due to light circulation is normal.

The surfaces of the fake are rough and bumpy, and the color is very bright, but many genuine half dollars that suffer from corrosion and a subsequent abrasive cleaning will have a similar look.

On the reverse of this fake, notice the extra metal filling the tops of the 5 and the 0 in 50 C. Also, an odd-looking pit appears on the rim at the 4 o’clock position. Additionally, the edge lettering is too sharp, and the spacing between words on the edge is incorrect when compared to a genuine coin.

Unfortunately, many coin holders do not allow for a good inspection of the edge, and it is not always feasible to remove a coin from its holder at a show.

Half dollar variety specialists will have an easier time with this fake. The spacing of the date digits does not match up with any genuine 1811 half dollar, and the reverse of the coin, with repunching at the bottom of the U in UNITED, is from an 1809 half dollar, Overton’s Reverse A from Early Half Dollar Varieties: 1794-1836 by Al C. Overton and Donald Parsley. While we were not able to identify the original obverse that was used, our best guess is that it was from the 1820s, judging from the style of Liberty’s face and hair.

This “mix and match” style of counterfeiting is commonly seen on Chinese fakes. It appears that fake dies were produced from two different coins, and the date was altered to 1811 on the fake obverse die. I’m not sure why, since 1811 is a common date — perhaps this is an economical way to produce an entire date set of fake Capped Bust half dollars. Be on guard with your purchases.