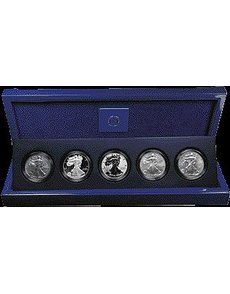 Collectors disappointed that they were unable to purchase a American Eagle 25th Anniversary Silver Coin set at issue price from the Mint should not grow so discouraged that they will stop buying coins and sets from the Mint.

It distresses me that so many collectors are stating that they will no longer buy from the U.S. Mint because they were unable to order a set of the American Eagle 25th Anniversary Silver Coin sets.

I, too, spent half a day trying to order, and several times I made it as far as the checkout before being bounced off the website. I still kept on trying till about 3 p.m. Eastern Daylight Time when I took a break. About 5:30 Eastern Time I tried again and got through finally around 6:00 p.m. I received an order number and a ship date for the one set I ordered.

I received three more emails from the Mint stating that the shipment date would be rolled back, the last one stating Dec. 12.

I was sure that my order would be canceled as time went on. Much to my surprise, on Dec. 10 I received shipment confirmation, and on Monday I received my one set I ordered.

It is beautiful and well worth the money I spent on it.

I consider myself lucky to have one.

As a collector I understand the frustration many felt, as I felt it too. Several times during the afternoon I wanted to quit because I figured I would not get through. I knew I was going up against investors and dealers, but, my friends, that is the nature of our hobby today. Nothing can change that.

We have allowed the dealers and speculators to run rampant over the hobbyist. The prevailing mind set seems to be if it ain’t slabbed and stickered it ain’t. Profit is king as many dealers and investors are turning a nice profit for these coins. But there again, I say it is our fault as grassroots hobbyists for not speaking up and for allowing our hobby to become what it is today. Money talks!

If I did not get a set I would be disappointed, but I would not quit the hobby or stop ordering from the U.S. Mint on occasion. We all knew the set would be hot, and that the phone lines and the website would be tied up. It wasn’t a surprise to anyone, based on comments in the past.

I was lucky enough to get the 2001 American Buffalo commemorative silver dollar set that sold out also.

Congratulations to those that received their sets.

To those that didn’t and are true hobbyists, hang in there. Don’t give up.

John Cooper first became interested in coins in 1976 with the Bicentennial silver issues. He did not start collecting much more than that until 1983 when he left the service. His collecting interests are: Proof and Mint sets and silver American Eagles in Mint State. He also has a deep interest in putting together a 20th century type set, which he is working on.