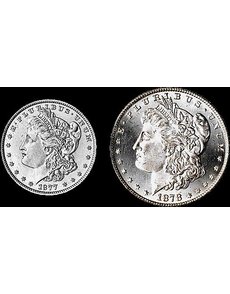 Last week in the Jan. 27 issue of Coin World Weekly I introduced a commentary on the Morgan silver dollar, the series we all love. George T. Morgan, who had come to America from England in 1876, created a series of pattern half dollars in 1877.

Instead of appearing on the half dollar, one of these was selected by Mint Director Dr. Henry R. Linderman to be used on the new silver dollars authorized by the Bland-Allison Act of Feb. 28, 1878. Dies were prepared quickly, and the first “Morgan dollars,” as we know them today, were struck on March 11. For many decades numismatists called them “Bland dollars,” for Richard Bland, co-author of the enabling legislation.

I’ve previously suggested that you take a Morgan dollar in your collection and spend some time studying its features, and that next week (now) I would discuss them. So, here goes — with the obverse this week (and the reverse in the Feb. 10 weekly issue): The portrait of Miss Liberty was modeled from Anna Willess Williams, a Philadelphia schoolteacher. At first her identity was not known, but when it was made public in newspaper accounts she received a lot of attention. This was the first time that Miss Liberty had been modeled from a specific human subject who was correctly identified by name. I won’t mention the myth that Sarah, daughter of Chief Engraver James B. Longacre, modeled for the 1859 Indian Head cent.

Miss Williams, with ample rounded cheeks and with copious tresses of hair, served the purpose well. Her portrait fills nearly the entire field. She wears a tiara inscribed LIBERTY, satisfying the requirement that this word should be on coins. Above her tiara are grains of wheat, perhaps a recognition to the agricultural interests of the Midwest, backers of the Bland-Allison Act — but who knows?

On her neck truncation is the initial M for Morgan, not easily seen. An unusual feature is that his initial also appears on the reverse; its use on both sides is unprecedented in American coinage. Around the top border is E PLURIBUS UNUM, another required statement. To the left and right are 13 stars, each with six points and with a ray oriented toward the border. The date is below, arranged in a curve to more or less match the rim. Inside the rim are dentils or toothlike projections.