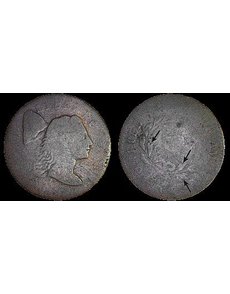 Arrows point to diagnostic points of leaf numbers and position on the reverse of the 1795 Liberty Cap, Plain Edge, cent that confirm its attribution as a rare NC-3 variety.

What has been reported as the seventh known example of the NC-3 1795 Liberty Cap, Plain Edge cent was certified June 6 by ANACS.

ANACS Senior Numismatist Michael Fahey said the grading service assigned the grade of Fair 2 to the new discovery. All of the other six known examples of the variety are heavily circulated.

Fahey said the coin was delivered to ANACS at the May 31 to June 2 Long Beach Coin, Stamp & Collectibles Expo in Long Beach, Calif., where he confirmed the variety attribution. The new discovery was submitted to ANACS as a possible Sheldon 77 variety or NC-3 variety by New Hampshire dealer Jim Carr, on behalf of Massachusetts collector Paul McDermott.

Beymer is responsible for discovering the first example of the variety, cataloged as NC-3 in Penny Whimsy by William H. Sheldon. Beymer discovered the Basal State 1 piece on April 5, 1980, in a group of coins he purchased at a Washington, D.C., show in July 1979.

The NC variety designation stands for “noncollectible.” Sheldon’s grading system differentiates between “collectible” and “noncollectible” varieties. At the time the Sheldon cataloging system was devised, a known die pairing represented by just one to three examples was assigned an NC attribution rather than a specific Sheldon number preceded by the letter S because Sheldon considered the variety to be so rare as to be “noncollectible.” Today, the NC designation has been expanded to encompass varieties with fewer than 10 examples known to exist.

Diagnostics for the NC-3 1795 Liberty Cap, Plain Edge cent indicate the reverse die was used exclusively for the NC-3 variety. According to United States Large Cents 1795-1797 by William C. Noyes, the reverse is distinguished by two leaves directly under the T of CENT. Two leaves are present left of the C in CENT, extending above the center of C. There is a triple leaf at CA of AMERICA.

The obverse die for the NC-3 variety was also used for the Sheldon 76a, 76b and 77 varieties. It is characterized by diagnostics showing about half of the top of the 5 embedded in the bust of Liberty, according to Noyes.

Another diagnostic involves the pole supporting the Liberty cap. “The pole is close to the bust, but does not touch,” according to Noyes. “The juncture of hair and forehead is just below the right foot of [the] T. LIB lower than RTY. L almost touches the cap.

Fahey said in an email to Coin World that he made his NC-3 determination based on a process of elimination.

“On the reverse, the word CENT is close to the ribbon bow, eliminating S-76B. The two long vertical leaves to the left of the ‘C’ in CENT eliminates S-77, which has a 3 leaf cluster in a different position to the left of C.

“The position of the top of the 5 in the date, the position of LIBERTY, and location of CENT, and the leaves next to the C in CENT are the key areas to identify the variety. Other diagnostics are not as easily seen due to the heavy wear the coin has received.”

Reynolds refers to the NC-3 cent as a “mystery” variety, since all known examples are heavily circulated and show no obverse or reverse evidence of die failure. Reynolds said one would expect a higher grade example to have surfaced.

Exclusive of McDermott’s coin, three of the remaining six 1795 NC-3 cents are Fair 2, one is About Good 3 and one Basal State 1, based on the 70-point Sheldon Grading Scale, with 70 considered a perfect coin.

The new discovery is likely to drop the rarity of the variety from an R-7+ to R-7, Reynolds said. Rarity 7 equates to “Extremely Rare (4 to 12),” according to Penny Whimsy.

New Hampshire dealer Carr, who has been a collector for 50 years and a dealer for more than 40 of them, said McDermott asked him to attribute the large cent he had acquired some time ago from among a group of U.S. coins purchased in a small, long-time collection.

Carr, an advanced collector of large cents, said despite the coin’s heavy wear, he had no trouble identifying the obverse die used to strike the coin. However, he said he spent a little more time inspecting the reverse, the diagnostics for which roused his suspicions as possibly another NC-3 find.

Carr said June 6 he had not yet spoken with McDermott to inform him of the confirmation of the NC-3 variety.

“I’m thrilled for him,” Carr said of McDermott, who sometimes assists him at coin shows and sells some of his own purchases. “It’s nice to see him catch a nice coin.”

Carr said he plans to bring the ANACS-certified coin with him when he meets McDermott at the Whitman Baltimore Coin and Collectibles Expo June 28 to July 1.

An example of the variety has appeared at auction twice since 2005, both involving the same coin.

The coin appeared in Heritage Auctions’ January 2005 sale of the Wes Rasmussen Collection, at which the piece sold for $8,625, which included the 15 percent buyer’s fee.

The coin was next offered as part of the Dan Holmes Collection, Part I auction in September 2009 by Ira & Larry Goldberg, Auctioneers, where it sold for $8,050, including the 15 percent buyer’s fee. The coin, which had previously certified Good 6 Details, Corroded, by ANACS, had been broken out of the holder for the Holmes auction. ¦