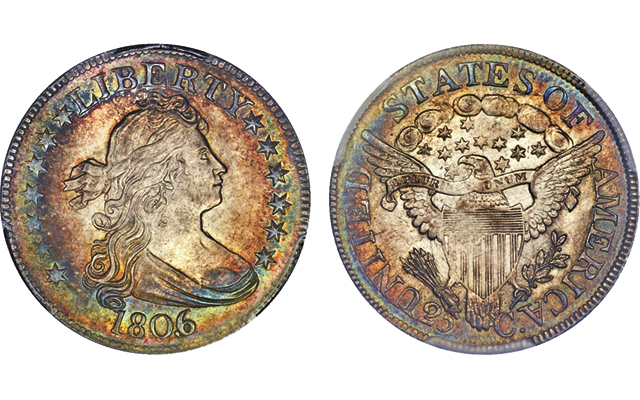 At the Professional Coin Grading Service luncheon on Aug. 8, hobby legend Q. David Bowers commented that coins in our hobby are being traded more frequently than in previous generations.

This new market velocity is clearly seen when coins from major collections return to the auction block after a holding period of perhaps a year or two, or even just several months! Since the spring of 2013, Heritage has had multiple auctions of treasures from the collection of St. Louis numismatist Eric P. Newman and already these coins are re-entering the marketplace via public auctions.

At Heritage’s Aug. 7 sale it was offered in a PCGS MS-65+ holder with a green Certified Acceptance Corp. sticker indicating quality within the grade. Despite the grade being lowered, it brought more than when offered as part of the Newman Collection, and sold for $176,250. It seems that the market was more willing to accept the piece as a high-end MS-65 than as MS-66.

Another Newman Morgan dollar, this one graded About Uncirculated 55 by NGC and bearing a green CAC sticker, sold for $470 at Heritage’s Aug. 9 sale, much less than the $705 it brought when offered at the same firm’s Nov. 16, 2013, Newman sale.

Among the unusual pieces that returned was an undated Kentucky token, struck in England around 1792 to 1794, that is considered a Conder token but is avidly collected by U.S. numismatists since examples circulated in the United States. Graded PCGS MS-65 red and brown it sold for $4,700 on Aug. 5. At Heritage’s May 16 Newman auction, in a comparable NGC holder, it sold for $5,287.50.