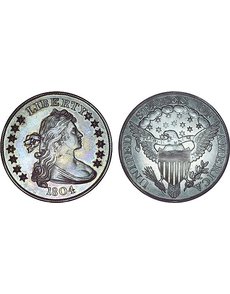 Many famed numismatic rarities, including the Idler/Bebee specimen of the 1804 Draped Bust silver dollar, will be on display during the American Numismatic Association World’s Fair of Money in Rosemont, Ill., in suburban Chicago.

The American Numismatic Association World Fair of Money promises to be the largest in ANA history, organizers said.

The show, scheduled to be held Aug. 16 to 20 at the Donald E. Stephens Convention Center in Rosemont, Ill., in suburban Chicago, includes numerous hobby-related exhibits, educational seminars and auction sessions, in addition to the record-setting 220,000-square-foot bourse. The bourse space is more than double the size of the 2010 show in Boston, said ANA Executive Director Larry Shepherd.

“Our museum showcase will feature the most extensive presentation of numismatic rarities ever displayed in one place,” Shepherd said.

The Museum Showcase, front and center on the floor, includes a 1793 Flowing Hair, ameri. cent and a collection of Gobrecht dollars, courtesy of Bob R. Simpson; the exhibit “Good as Gold: America’s Double Eagles,” courtesy of the Smithsonian Institution; the first U.S. commemorative coin struck — an 1892 World’s Columbian Exposition half dollar — courtesy of the Field Museum; the Nathanael Greene Society of the Cincinnati medal, courtesy of Brian Hendelson; a collection of rare Spanish Colonial medals, courtesy of the Banco de México; and a comprehensive display of Chicago bank notes.

In addition, the Bureau of Engraving and Printing will bring its “Billion Dollar display” of high-denomination U.S. paper money and fiscal instruments, plus give regularly scheduled demonstrations of its Civil War era, 1-ton, hand-turned, money printing press.

A Collector Exhibits area provides ANA members the opportunity to share their collections and research with fellow hobbyists. Several dozen competitive and noncompetitive exhibits will be displayed this year on a wide range of topics.

The bourse, which is nearly sold out, also includes special sections for U.S., world and ancient coins as well as paper money.

More than 1,000 dealers are slated to attend the show, and many will provide free, informal appraisals for visitors with coins and paper money.

The Mint Promenade will feature 18 mints from four continents. Visitors can purchase a World Mint Passport at the front entrance and collect coins from participating mints. Officials for some mints will also discuss new issues during World Mint Theater presentations on the World Mint Stage, located on the bourse floor.

Stack’s Bowers Galleries is the official auction company for both the World’s Fair of Money and the official pre-show event, which is scheduled for Aug. 13 to 15 in conjunction with the Professional Numismatists Guild. Auctions begin at the pre-show on Aug. 13, and continue through Aug. 20. A special Stack’s Bowers Galleries Rarities Night Auction is slated for Aug. 18

Organizers have also arranged for several educational opportunities for attendees.

Numismatic Theater presentations, held Aug. 16, 17, 19 and 20, allow ANA members to discuss their research and ideas in a lecture format. Planned talks range from ancient coins and Mexican numismatics to obsolete currency and presentations with a Chicago-area numismatic flavor.

“Coin Collecting 101,” a free, informal 30-minute presentation for numismatic newcomers, will be held at various times on the World Mint Stage.

The new Kids Zone, along with Treasure Trivia, highlights family activities that provide children with a variety of activities and chances to win prizes.

Show hours are 9 a.m. to 5:30 p.m. daily. Admission is free for ANA members and $6 for nonmembers. Children ages 12 years old and younger are admitted free.

The 2011 edition of the World’s Fair of Money marks the ANA’s 120th anniversary. Robert Leonard is the event’s general chair and Mark Wieclaw is the assistant chair. The Chicago Coin Club is the host club.