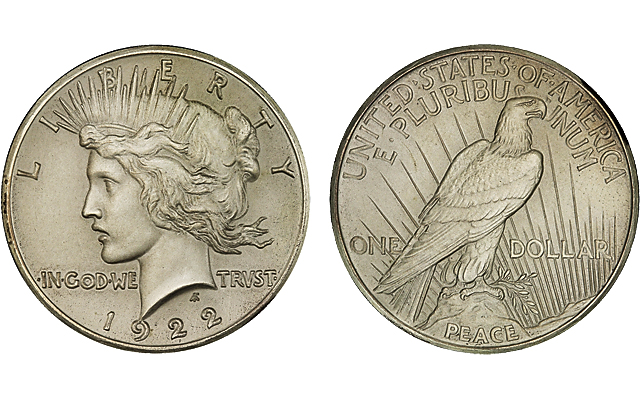 This Matte Proof 1922 Peace, High Relief dollar graded PCGS Proof 67 will be on display at the 2014 ANA World's Fair of Money in Rosemont, Ill.

A Matte Proof 1922 Peace, High Relief dollar graded Proof 67 by Professional Coin Grading Service will be one of the featured exhibits in the official Museum Showcase display at the American Numismatic Association’s 2014 World's Fair of Money later this summer.

The coin was originally owned by former U.S. Mint Director Raymond T. Baker, who served in that role from 1917 to 1922, and is currently owned by collector Bob R. Simpson of Texas.

Simpson is partnering with Legend Numismatics to display the coin at the World’s Fair of Money, which takes place Aug. 5 to Aug. 9 at the Donald E. Stephens Convention Center in Rosemont, Ill.

"Only about 10 High Relief 1922 Peace dollars have been reported, and this example is the highest grade of the seven that have been certified by Professional Coin Grading Service,” PCGS President Don Willis said. "No finer example has been reported anywhere else.”

The coin had been passed down through generations of Baker’s family and friends until June 2, 2014, when Legend Numismatics President Laura Sperber obtained the coin for Simpson at an Ira & Larry Goldberg Coins & Collectibles auction in Beverly Hills, Calif.

"I consider this particular coin to be the ultimate Peace dollar,” Simpson said. "No other Peace dollar I am aware of has the history or is in the same state of preservation. It's a coin that really needs to be displayed because it is such a treasure."

The Peace dollar was first introduced into circulation in December 1921 with a high relief design.  It was designed by Anthony de Francisci, who won a national competition conducted by the Commission of Fine Arts.

"The original high relief of the dies created numerous problems for the Mint, including shortened die life and difficulties in bringing up the details with a single strike," a PCGS CoinFacts description of the Peace dollar reads. "The coins would not stack properly because of uneven thickness and raised 'fins' on the rims."

Although the relief subsequently was lowered for 1922 circulation production, a small number of 1922 Peace dollars were struck in high relief and today are highly prized by collectors.