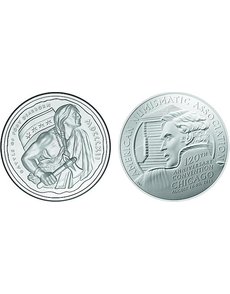 The first medal in a series of four honoring the American Numismatic Association World’s Fair of Money highlights the Battle of Fort Dearborn. In designs by Jamie Franki, participants of the battle appear on opposite sides of the medal, seen here in design renderings from the Medalcraft Mint.

The first release in a series of four medals celebrating the American Numismatic Association World’s Fair of Money in Rosemont, Ill., is now available through preorder sales.

The 2011 medal, being offered in both bronze and silver versions, honors the Battle of Dearborn, a historic battle from the War of 1812 in what is now Chicago. The convention site, Rosemont, is a Chicago suburb.

Fort Dearborn’s commander, Capt. Nathan Heald, left with his garrison, including a civilian contingent, for Fort Wayne in Indiana Territory when a band of Potawatomi ambushed the group 1.5 miles south, killing 38 men, two women and 12 children. Fort Dearborn was burned to the ground.

The Battle of Fort Dearborn is commemorated on the fort’s site with a monumental sculpture by Henry Hering called Defense, which adorns the Chicago River’s Michigan Avenue bridge.

Artist and medal designer Jamie Franki uses both sides of the medal to commemorate the opposing forces in the battle. The obverse features one of the Potawatomi warriors and the reverse features the fort and one of the Army regulars, both of whom were derived from Hering’s Defense monument.

Fort Dearborn, a U.S. fort built on the Chicago River in 1803, is one of four items of significance honored on the flag of Chicago, which was the inspiration for the four-year medal series.

The ANA commissioned Franki, former master designer in the U.S. Mint’s Artistic Infusion Program, to design a series of medals celebrating the 2011, 2013, 2014 and 2015 Worlds Fair of Money events, all set in Rosemont.

Franki is an art professor at the University of North Carolina at Charlotte. Designs of his were selected for the reverse of the 2005 Jefferson, American Bison 5-cent coin and for the Jefferson portrait on the 2006 and later 5-cent coins.

Bronze and silver medals will be issued bearing Franki’s design, as will badges. All medals and badges are being struck at the Medalcraft Mint.

No more than 125 bronze medals measuring 2.75 inches in diameter will be issued, while a limit of 175 two-medal sets will be issued featuring examples of 1.25-inch bronze and .999 fine silver medals. A maximum of 125 convention medal badges, bearing the smaller bronze version with a ribbon drape, will also be issued. Weights were not available.

The 2.75-inch bronze medals are priced at $65, while the two-medal sets are priced at $155. Badges cost $26. The ANA reserves the right to limit order quantities per purchase.

Prepaid orders are being accepted for August delivery by telephoning the ANA at (800) 367-9723.