ANA to open new exhibit at Money Museum on shipwrecks 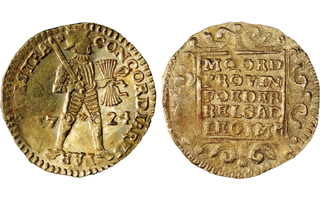 A Dutch gold ducat, struck in 1724, was recovered from the Akerendam shipwreck, which sunk in 1725 in the North Sea. It is one of the many items that will be included in the ANA’s new exhibit.

The American Numismatic Association will have a new exhibit in the main upper gallery of its Edward C. Rochette Money Museum this summer.

ANA Executive Director Kimberly Kiick made the announcement during an April 8 teleconference of the ANA Board of Governors.

“Treasures of the Deep: Galleons, Storms and Archeology” is set to open before the ANA’s Summer Seminar starts on June 21.

According to the ANA, the new exhibit will tell the story of the ships, people and riches that ultimately found their way to the bottom of the sea floor in the 16th through 19th centuries. The exhibit will also explore how these treasures are discovered and salvaged today.

Douglas Mudd, the museum’s curator, told Coin World, “‘Treasures of the Deep’ is an exhibit that is designed to capture the imagination. People have always loved the idea of pirate treasure, but we’re also going to discuss how this treasure is found — we’ll explore the science behind discovering underwater treasure. When the public comes to this exhibit, they’ll see the whole story of underwater treasure from pirates to modern underwater archeology.”

Kiick added, “We’re really excited about this opportunity to share more education of numismatics in our community.” She added that the ANA’s new website would feature expanded virtual exhibits.

The new exhibit replaces “A House Divided: Money of the Civil War,” which was introduced in the main gallery November 2008. That exhibit will close May 3.

Looking to the summer

Among the other discussion topics was an update on the ANA’s World’s Fair of Money in Rosemont, Ill., Aug. 5 to 9.

Kiick said that the banquet would feature a silent auction to help fund the Robert Lecee advanced scholarship fund, which provides funding for adults to attend the Summer Seminar. She said she hopes the auction will be fun and “spice up the banquet.”

Another initiative for this summer’s ANA show is “Hands Across the Border,” a collaboration between the ANA and the Royal Canadian Numismatic Association, which will host its annual convention in Toronto Aug. 13 to 16, the week after the ANA convention.

Past ANA President Clifford Mishler wrote in the April 2014 issue of The Numismatist, the ANA’s official publication, “The 2014 ANA/RCNA convention experience will be an exciting and enlightening two weeks of camaraderie as the Canadian and American numismatic communities rekindle their long-standing relationship and celebrate their shared heritage.”