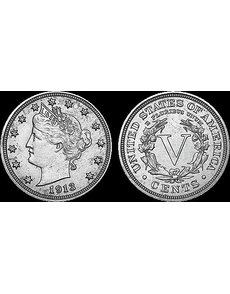 The McDermott/Bebee 1913 Liberty Head 5-cent coin was once owned by James V. McDermott, who reportedly carried the coin in his pocket in the 1960s, showing it off to bar patrons and boasting about its incredible value.

“The ANA’s Museum Showcase is a wonderful addition to our event,” said FUN Convention Coordinator Cindy Wibker. “FUN is a proud ANA member organization, and we’re thrilled to add these amazing exhibits to our bourse.”

FUN donated $5,000 to the ANA Road Show in support of its educational mission.

The ANA Road Show gives members and collectors around the country an opportunity to see items from the ANA’s Edward C. Rochette Money Museum. The ANA also offers educational programming from the Florence Schook School of Numismatics and exhibits from the Dwight N. Manley Numismatic Library as part of the Road Show.

? A 1913 Liberty Head 5-cent coin, one of five examples known. The coin in the exhibit is the McDermott/Bebee specimen. The McDermott-Bebee specimen, now certified Proof 55 by Numismatic Guaranty Corp., was owned in the 1960s by James V. McDermott, who reportedly carried the coin as a pocket piece, hence its impaired state. Omaha numismatist Aubrey Bebee, and his wife, Adeline, were the last private owners in the 1980s, before donating the coin to the ANA in 1989. The Bebees had purchased the coin in 1967 at auction for $46,000.

? An 1804 Draped Bust dollar, popularly known as “The King of U.S. Coins.” The 1804 dollar is extremely rare, with only 15 known examples in three different classes. No U.S. dollars dated 1804 actually were struck in that year; Class I originals were struck in 1834 and 1835 as diplomatic gifts (eight known), while Class II (unique) and Class III pieces (six known) were struck during the 1850s for collectors. The Class III William Idler/Bebee specimen was donated to the ANA by the Bebees in 1991.

? Famous Errors — Featured are error coins with anomalies that are visible to the naked eye. They are the 1955 Lincoln, Doubled Die Obverse cent; a 1937-D Indian Head, Three-Legged Bison 5-cent coin; a 2004-D Wisconsin, Extra Leaf quarter dollar; and “Godless” Presidential dollars from 2007 to 2009 missing the intended IN GOD WE TRUST inscription incuse on the edge.

For information on how to book an ANA Road Show appearance, contact coordinator Tiffanie Bueschel at 719-482-9816 or email her at bueschel@money.org.

To learn more about the ANA Road Show, go to the website Money.org/ANARoadShow. ¦