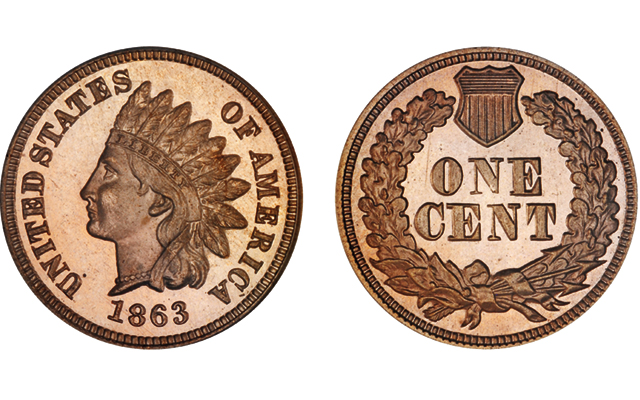 This 1863 Indian Head cent pattern, stolen in 2007 from the ANA’s Edward C. Rochette Money Museum, has been returned to the ANA.

An 1863 Indian Head cent pattern has been returned to the American Numismatic Association’s headquarters.

The coin was one of more than 300 historically significant and rare coins and patterns valued at nearly $1 million stolen over a three-month period in 2007 from the ANA’s Edward C. Rochette Money Museum.

The coin was returned to the ANA by a collector who wishes to remain anonymous, according to an ANA news release.

In January 2012, Wyatt E. Yeager, the museum’s former collections manager, pleaded guilty in a Delaware Federal District Court to the theft of more than 300 rare coins valued at nearly $1 million from the museum’s collections.

Yeager stole the coins in early 2007 during his brief employment with the ANA and quickly sold many of them at auctions both in the United States and abroad.

The ANA noticed that items from its collection were missing in October 2007 and launched an internal investigation.

ANA officials publicly acknowledged the theft for the first time in a story published in the Jan. 30, 2012, issue of Coin World.

According to the ANA at the time, the theft was kept confidential to not compromise the investigation, during which Yeager relocated to Ireland.

“We are thrilled to have this coin back where it belongs — in the Money Museum’s collection,” said ANA Executive Director Kimberly Kiick. “We encourage collectors who may have purchased coins that are missing from the museum collection to be a part of the ANA’s recovery process.”

The recent recovery stems from the ANA’s collaboration with various law enforcement agencies and specifically targeted recovery efforts, according to the ANA. The ANA has released reorganized lists of missing and recovered coins at Money.org/CoinRecovery.

Collectors who believe they may be in possession of a stolen coin are encouraged to contact the ANA. The ANA may, at its discretion, offer reimbursement for stolen artifacts, which will not exceed the purchase price of the coin.

“Our goal has always been to recover all of the artifacts missing from the Money Museum, but we also want to be fair to the collectors who unknowingly purchased stolen coins,” said ANA Vice President Jeff Garrett.

In August 2009 the ANA received $750,000 in a negotiated settlement from its insurance carrier for losses related to the theft. Under the terms of that settlement, the ANA retains title to any stolen coins that may be recovered. The funds from the settlement were placed in a dedicated museum fund.

Anyone with information about the stolen coins from the Money Museum can telephone the ANA at 719-482-9841 or email Garrett at Garrett@money.org.