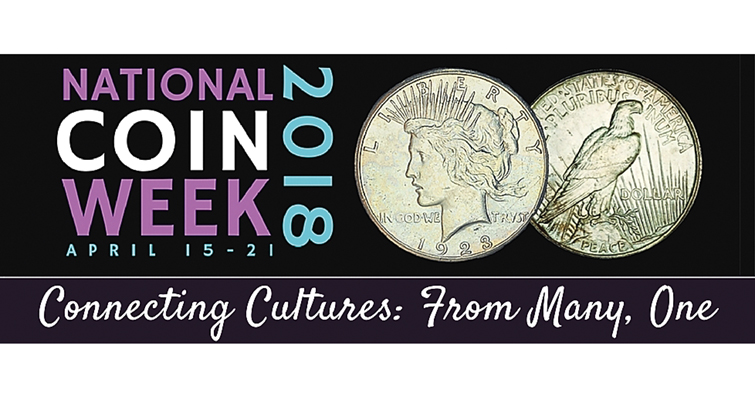 The American Numismatic Association announces activities for the 2018 celebration of National Coin Week.

The American Numismatic Association has revealed its plans for “Connecting Cultures: From Many, One,” the theme for the 95th annual National Coin Week, April 15 to 21.

According to the ANA, the theme was provided by ANA member Linda Mosvick.

The association will host a variety of National Coin Week activities online and at the Edward C. Rochette Money Museum in Colorado Springs, Colorado. Events and educational content focuses on U.S. and world coins throughout history, commemorative medals, monetary unions, designs on euro notes, and more.

??A writing contest open to ANA members about how numismatics creates unity. Topics can be historical and research based, or personal experiences about people coming together through numismatics. Winning and high-quality entries will be featured on the ANA National Coin Week blog and webpage. Selected entries qualify for prizes.

??An online trivia challenge. Every day from April 15 to 21, a new clue will be released on the ANA’s social media channels and their website. Participants submit their answers online for a chance to win Proof sets and one-year memberships to the ANA.

??A youth activity, “Bridges on Coins.” Children are provided close-up illustrations of bridges featured on coins and paper money, and challenged to identify the objects.

??Online resources on their website including articles from The Numismatist, promotional documents, links and suggestions from the ANA library, and more.

??An open house at the Money Museum in Colorado Springs on Saturday, April 21, which will include free admission, activities for children and adults, and the minting of the 2018 National Coin Week medallette in the museum’s Mini-Mint.

“Symbolism is often an important part of designs on coins and currency,” said Andy Dickes, ANA collections manager and coordinator of the 2018 National Coin Week. “For example, the first coins struck for circulation at the United States Mint in 1793 were large copper cents about the size of today’s quarter-dollars, and the ‘tails’ side design on those cents depicted a chain with 13 links forming a circle. It symbolized the unity of the 13 original colonies.” 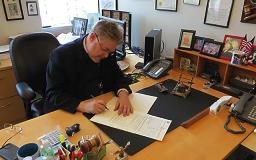 The ANA announces the theme of National Coin Week in 2015 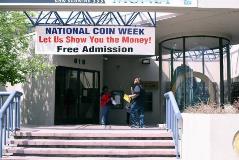