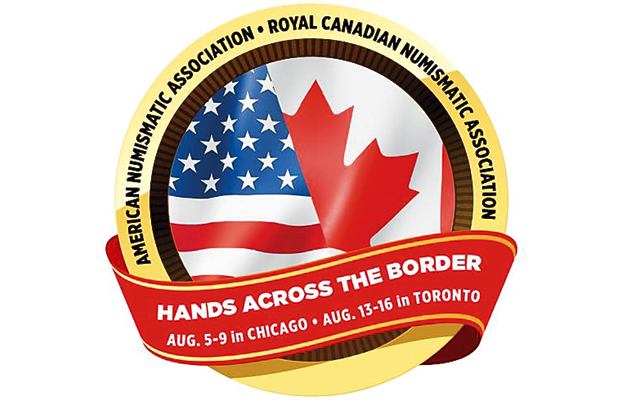 The ANA World’s Fair of Money will be held Aug. 5 to 9 in Rosemont, Ill., while the RCNA 61st Anniversary Convention will be held the following week, Aug. 13 to 16, in Mississauga, Ontario. ANA and RCNA members will get free admission to both events with a valid ANA or RCNA membership card.

The RCNA honorary chair at the World’s Fair of Money is William K. Cross, author of The Standard Catalogue of Canadian Coins. RCNA President Bret Evans will be present at the ribbon-cutting ceremony in Chicago. Clifford Mishler will be the ANA honorary chair at the RCNA 61st Anniversary Convention. ANA President Walter Ostromecki Jr. and Mishler will assist in the ribbon-cutting at the opening ceremonies.

“ 'Hands Across the Border,' in my mind at least, brings the two organizations closer together like they were in the past and further develops the collecting community in North America,” Mishler said. “The more individuals we have doing numismatic related things, the greater the growth of the hobby in the United States and Canada.”

Several events at the World’s Fair of Money will be geared toward extending “Hands Across the Border":

As another benefit of the joint promotion, RCNA members will receive ANA member prices when registering for seminars and classes at the World’s Fair of Money.

“Those who participate in forums and educational opportunities at the two conventions will broaden their knowledge and appreciation of collecting in each of the respective countries,” Mishler said.

Also the ANA will contribute issues of The Numismatist and Mini-Mint tokens to the RCNA registration kit, and several events at the RCNA’s 61st Anniversary Convention in Toronto will be held in partnership with the ANA:

A special Niagara Falls tour is available to ANA members on Tuesday, Aug. 12. The tour departs from the RCNA convention site, the Delta Meadowvale hotel in Mississauga.

For more information about RCNA’s convention or to register, visit the RCNA's website.