Money Museum's 'Treasures of the Deep' exhibit to open June 5 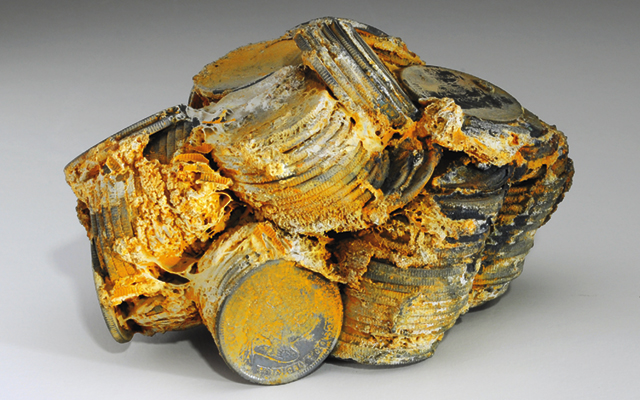 Shipwreck treasure, such as this coin conglomerate, will make up the ANA Money Museum's newest exhibit, "Treasures of the Deep." It opens June 5.

Image courtesy of the ANA

Not only was undersea treasure a major focus of Coin World’s most recent monthly issue, it is also the subject of the newest exhibit at the American Numismatic Association’s Edward C. Rochette Money Museum.

“Treasures of the Deep: Galleons, Storms and Archeology” opens June 5 at the museum’s Colorado Springs, Colo., location and tells the stories of the world’s greatest shipwrecks, the treasures they carried, and the efforts to preserve the shipwreck sites.

“This exhibit focuses not only on the romance of sunken treasure, but also on the exciting process of rediscovering and recovering treasure from the ocean floor,” Money Museum curator Douglas Mudd said. “A big part of the story is the science involved in rediscovering these wrecks, which are time capsules that preserve the history of seafaring.”

The lure of gold and silver discovered in North America drew settlers from Europe to explore and colonize the New World, changing the economic and political world map in the process. Spain used the bullion discovered to craft ingots and coinage in the form of silver reales and gold escudos. These coins would dominate the world economy for centuries and become legendary for their rich history as pirate gold and lost treasure.

Coin World recently delved deep with shipwreck-related coverage in its June monthly issue. Among the topics were the the wreck of the SS Central America and the treasure it buried, the "Shipwreck Effect" that is attached to recovered coins, and the ways in which shipwreck coins are marketed.

The Money Museum exhibit will explore adventures on the world’s oceans along with artifacts and treasure found in underwater wrecks from the 16th century to modern day. The history of underwater recovery and archaeology will be highlighted with the help of Odyssey Marine Exploration, one of the largest underwater recovery organizations. The exhibit highlights the research and technology used to locate long-lost ships and preserve historical artifacts.

A free opening reception will be held June 5 from 5 p.m. to 7 p.m. The Money Museum is located at 818 N. Cascade Ave., Colorado Springs. Visitors will be given a special “Treasures of the Deep” medallette, and complimentary wine and hors d'oeuvres will be served.

The Money Museum is open from 10:30 a.m. to 5 p.m. Tuesday through Saturday. Admission costs $5 for adults, $4 for seniors, students or military, and is free for children 12 and under.