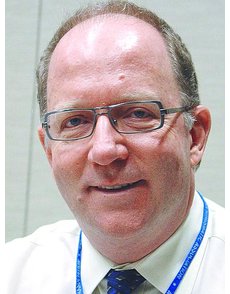 Larry Shepherd is no longer executive director of the 30,000-member American Numismatic Association.

ANA President Tom Hallenbeck, during a telephone conference with the numismatic press beginning at 2 p.m. EDT today (Sept. 28), announced that the ANA Board of Governors has “ended its employment relationship” with Shepherd.

Hallenbeck was joined in the conference call by ANA Governor and Immediate Past President Clifford Mishler and Ron Sirna, ANA general counsel.

Hallenbeck said the ANA Board voted 9 to 0 Sept. 20 to end Shepherd’s service as executive director. Shepherd was hired in March 2008 and had approximately two years left of a five-year contract. He was placed on paid administrative leave Aug. 20 by unanimous vote of the board.

In a press release issued after the conference call, the ANA noted:

Hallenbeck said, “We appreciate Shepherd’s past three years of contributions, but the Board determined the association needs to move in a different direction going forward, providing greater focus on its core educational mission.”

Hallenbeck noted: “The ANA is about more than just being a big coin show. It’s about our individual members and member clubs. It’s about educating our members and the general public, doing so by creating a positive numismatic experience for the many diverse segments of our organization and the greater hobby community.”

Hallenbeck announced that the ANA is establishing a corporate governance committee and will soon begin the search for a new executive director. He noted that he expects to focus on providing a more balanced approach to serving ANA’s educational mission.

“We will be seeking a new executive director to help us achieve this objective in a way that will better serve the total hobby community,” Hallenbeck said. ¦