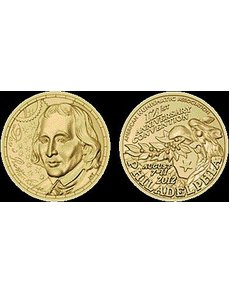 The ANA’s official 2012 World’s Fair of Money medal depicts first U.S. Mint director David Rittenhouse on its obverse. The medal’s reverse derives its design from the 1792 half disme. The medal was designed by Jamie Franki.

First director of the United States Mint, David Rittenhouse, will be honored on the official medal for the American Numismatic Association World’s Fair of Money, held Aug. 7 to 11, at the Pennsylvania Convention Center in downtown Philadelphia.

The medal was designed by Jamie Franki, an art professor and former master designer in the U.S. Mint’s Artistic Infusion Program.

The piece celebrates Rittenhouse’s contributions to science and American coinage history. Largely self-educated, Rittenhouse is known for his skills in astronomy and surveying, and for constructing a variety of instruments to help him in his work.

“Philadelphia has a rich heritage, not only as the cradle of the American Revolution, but also as the foundation of our nation’s coinage,” Franki said. “I endeavored to tie aspects of these two ideas together in a unique way.”

The obverse of the medal features a portrait of Rittenhouse while the reverse is reminiscent of the rare 1792 half disme, one of the first issues of the newly established Mint (with the Mint not yet operational, the 1792 half disme was actually struck in the basement of a sawmaker’s shop in Philadelphia). Rittenhouse personally delivered examples of the new coinage to Thomas Jefferson, and many were given to dignitaries as examples of minting excellence and American ideals.

The stars, gears and markings along the obverse rim of the medal are derived from Rittenhouse’s orrery machines, devices he painstakingly constructed to create accurate maps of the solar system. Curved along the edge is a facsimile of the inventor’s signature.

The reverse of the medal depicts an eagle motif.

“Since Philadelphia is the City of Brotherly Love, I placed an olive branch in the eagle’s beak as a sign of peace; 13 olives on the branch represent the original colonies,” Franki said. “The typeface I used is called ‘Benjamin Franklin’ after the great Philadelphian who coincidentally created legends for the half disme and subsequently for the Fugio cent.”

The reverse also carries a single star, as does the reverse of the half disme.

Franki indicated that he is thrilled to have had the opportunity to design the official convention medal for the upcoming World’s Fair of Money, according to an ANA press release.

“It is my hope that bringing together our Mint’s first director and one of his first coins on a commemorative ANA medal serves as a reminder of Philadelphia’s importance as a center of numismatics, culture and patriotism,” Franki said.

Franki will conduct a Money Talks presentation titled “David Rittenhouse and the 1792 Half Disme” at 1:00 p.m. on Saturday, Aug. 11, in Room 104B of the convention center. Franki’s Money Talk will be followed by a meet-and-greet at 2:00 p.m. in the ANA Area, where he will be signing the holders for the medal.