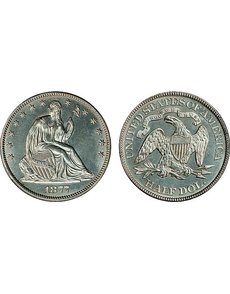 While six-figure coins capture headlines, many coins were sold at the ANA auctions such as this 1877 Seated Liberty half dollar graded Mint State 63 prooflike that realized $863 at the Stack’s Bowers Galleries ANA Rarities Night auction.

The just-finished American Numismatic Association’s World’s Fair of Money in Rosemont, Ill., was nearly universally praised by dealers as a rousing success, buttressed by a steady rise in gold prices, a huge bourse floor and a very successful official auction by Stack’s Bowers Galleries.

Stack’s Bowers Galleries’ various sessions spanned six separate catalogs. The more than 9,000 lots offered realized slightly more than $40 million, including nearly $30 million in U.S. coins. When combined with the $31 million Heritage auction held before the convention, the auctions offered more than 16,000 lots that sold for more than $71 million in total.

The Aug. 18 Stack’s Bowers Rarities Night catalog introduction called it “a candidate for one of the most memorable sales of our era.” While that statement may inspire debate, the session — designed to compete with Heritage Auction’s Platinum Night sale — offered a diverse group of coins that was the subject of innovative marketing including video reviews of auction highlights by grading service leaders David Hall and Mark Salzberg.

Floor and telephone bidding was notably quiet during the session — perhaps more so than at other recent major auctions — a further sign that collectors and dealers are increasingly turning to the Internet to make their bids.

The fierce competition between Heritage and Stack’s Bowers to fill their August auctions brought more coins to auction than the total offered at the auctions immediately before and during the 2010 ANA convention. The 2010 total results was $60 million.

Several dealers lamented during the show that they found fewer buying opportunities on the bourse floor because so many of the coins were in the auctions, yet many dealers took advantage of auction opportunities to add coins to their inventories and lot viewing was constantly busy.

Not all coins at auction are reserved for the super-rich, as dozens of quality half dollars in the Osburn Collection were offered without reserve and sold for less than $2,000. ¦