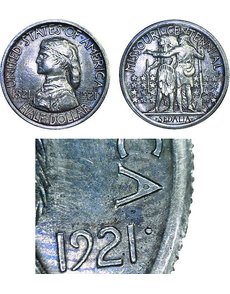 Two diagnostics indicate the commemorative half dollar shown is cast, not struck. A number of tiny pits appear in the fields, from air bubbles formed during the casting process, and the piece is severely underweight from a genuine coin.

In About Uncirculated 50 condition, the more common version is still worth $425, making it worth a counterfeiter’s time to copy, as illustrated by the counterfeit examined in this column. The counterfeit shown here is unusual due to its method of manufacture, having been cast rather than die struck.

Virtually every previously seen fake Missouri half dollar was a struck copy with semi-prooflike surfaces and a number of small defects.

The illustrated counterfeit surfaced back in the 1980s and has been documented in the American Numismatic Association Counterfeit Detection reprint.

As noted, this counterfeit is a cast copy instead of a struck copy. At first glance it appears to be a slightly worn example of a genuine coin that has been polished, not all that unusual an occurrence for an early commemorative half dollar.

Many of the types produced before the 1930s were not preserved properly, as opposed to later pieces that are usually seen in choice Uncirculated condition.

Two diagnostics identify this fake as a cast counterfeit.

The first is a number of tiny pits in the fields, caused by air bubbles that formed during the casting process. These can be seen in the close-up image, around and above the 1921 date.

While any silver coin can suffer from light corrosion pitting, pits caused by corrosion are more ragged and irregular in appearance than pits formed by casting.

The second diagnostic is the weight of the fake. Cast copies often fall outside the tolerance levels for a genuine coin.

A normal silver half dollar weighs 12.5 grams. This cast copy weighs only 10.9 grams, which is approximately 13 percent less than normal weight.