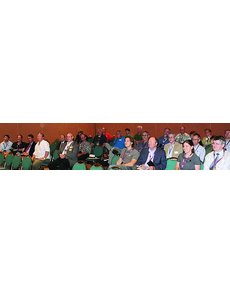 The Numismatic Bibliomania Society meeting at the ANA World’s Fair of Money in August in Rosemont, Ill., was well-attended by collectors, researchers and authors of numismatic literature.

At the American Numismatic Association World’s Fair of Money in August, I had the opportunity to attend several meetings of specialty clubs and to poke my head in on a few other programs.

A visitor to the annual show, which had a registered attendance of more than 9,000, might think at the outset that such meetings would be packed, certainly with several hundred people on hand, if not more.

Expecting the same at the star-studded Numismatic Theater program of many different one-hour presentations would also be reasonable, not to overlook special events.

Reality was quite different. With one exception, perhaps the two dozen or so events I checked in on were very lightly attended and had very little dynamism.

The Civil War Token Society meeting had its officers up front and perhaps fewer than 20 in the audience in a room that could have accommodated a hundred or more.

The Medal Collectors of America meeting had even fewer attend.

In the Numismatic Theater, Dennis Tucker held forth with an interesting discussion of his leadership at Whitman Publishing LLC and gave some inside tips on producing and selling books.

Those who listened enjoyed their experience, but not many were on hand.

I counted one exception among such events I viewed: the meeting of the Numismatic Bibliomania Society, drawing collectors, dealers, and historians interested in out-of-print coin books, auction catalogs and the like.

There were perhaps three dozen or so on hand at the NBS meeting, but they represented some of the most talented and accomplished people in our hobby. The discussions were dynamic. But wait! This leads to something else:

Founded in 1980, the NBS at present has about 400 members who pay dues and receive The Asylum magazine several times a year.

The roster is smaller now than it was a decade ago. Now the “but wait!” part. The NBS sponsors E-Sylum, a free email magazine published every Sunday (contact whomren@gmail.com for information). At latest count, there are more than 1,600 readers! Wow!

In my weekly mail, issues of Business Week, Newsweek (in particular) and other magazines get thinner with each issue.

The reason: so much information is free and instant on the Internet.

With lackluster attendance at numismatic educational events and reduced memberships and subscriptions to things in print, are we soon to be an Internet-only society?

Sort of like a chicken in a small cage that stays there to lay eggs.