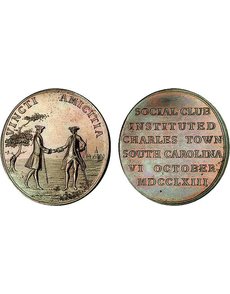 Shown above is one of three known Charleston Social Club medals, whose origins still intrigue and mystify researchers as to whether such an organization ever existed, and if so, when and why the medals were made.

One of the beauties of coins and medals as collectibles is that most are fairly easy to identify. As long as they’re legible and you understand the language of the inscription, a coin or medal typically says where it’s from, and who made it and when. This is perhaps one of the appeals of our field. It offers sure things in a world that offers few.

One of the most fascinating medals of the Colonial era, however, has befuddled numismatists for more than a century and a half.

Despite an inscription that includes a city, a date and even an issuing authority, the rare Charleston Social Club medal still suffers from something of an existential crisis. We don’t know what it is or why it exists, only that it is historic and very rare.

How could there be a riddle about a medal so clearly identified, even down to the day of its issuance?

After years of research by various modern numismatists, no one has ever found evidence of a “Charles Town Social Club.” Charleston, founded in 1670, was one of the American Colonies’ richest urban centers, its wealth built on the back of plantation slavery. Dozens of various social clubs were founded by the glitterati of the day, from the Charleston Jockey Club to the South Carolina Society to more obscure organizations like the Kolf Baan Club, the Ugly Club, and the Three Pace Club.

As early as 1856, Boston numismatist Jeremiah Colburn wrote to antiquarians in Charleston trying to figure out which club produced the medals, and he even managed to find the last surviving member of a group called the Charles Town Social Club. No one knew a thing about the medals. The trail has only gotten colder since.

We know they’re old. One has a provenance going back to the 1817 sale of the Thomas Brand Hollis Collection, sold after the collector’s death in 1804.

Today, only three are thought to exist. The most recent sale of one, by Stack’s in 2006, realized $57,500. Clearly, the mystery of the medal isn’t holding back its value in the marketplace.

The wealthy members of the Charleston Social Club likely issued the medal to secure their place in the august history of their town.

As it turns out, even such a concrete memento of their organization wasn’t enough to keep the club from the dustbin of history.