An embarrassment of riches for collectors 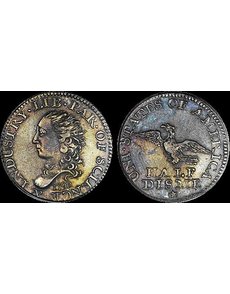 This 1792 half disme graded AU-58 sold at auction in 2009 for $132,250 and will be offered again in Heritages Florida United Numismatists auction in January alongside six other examples of this key issue.Images courtesy of HeritageAuctions.com.

Each year in January, the coin market starts off impressively as thousands of high-powered lots change hands at auction.

In addition to providing a broad test of the market’s overall strength, January’s big auctions can test the market for a particular issue. At major auctions, like Heritage’s Florida United Numismatists auctions held in Orlando from Jan. 9 to 13, a single sale may feature multiple examples of a rare issue that can give a full view of the market for a given issue.

For a single issue that will be tested in January, let’s take a look at the 1792 half disme. The Heritage auction has seven separate examples.

To define the coin’s appeal, one only has to look at a typical auction catalog entry. Here’s part of Heritage’s description for an example grading About Uncirculated 58: “The 1792 half disme is a classic American rarity, the first in any lineup of the most important coins ever issued by the United States. To put it another way, the 1792 half disme must be considered the premier issue in what could be called the Who’s Who of American Numismatics. Acquisition of one of these national treasures is a crowning achievement for any numismatist, investor, or dedicated collector.”

While some numismatists may contend that the Specimen 67 coin is the “finest known,” Stack’s Bowers Galleries will offer the highest numerically graded example as part of its Jan. 21 to 25 Americana Sale in New York City. The MS-68 stunner comes from the Cardinal Collection.

Will the offering of multiple exceptional examples of this scarce coin be too much for buyers, or will it create excitement and elevate prices? Such are the risks inherent in auctions, and sales like the Heritage and Stack’s Bowers offerings add heat to the rare coin market.

For more modest budgets, Heritage will offer 1792 half dismes in Very Good 10 and AU-50 alongside two examples with noted problems: one that has been holed and plugged but with Very Fine details, and another with Fine details but bent. Still, as Heritage notes in one of its catalog entries, “Any survivor from the very scarce issue is a prize.”

Estimates on what survives from the original mintage of 1,500 pieces commonly range from 250 to 400 examples. Even the homeliest piece typically sells for more than $20,000. ¦