Early arrival at the Denver Mint in 1982 uncovered information 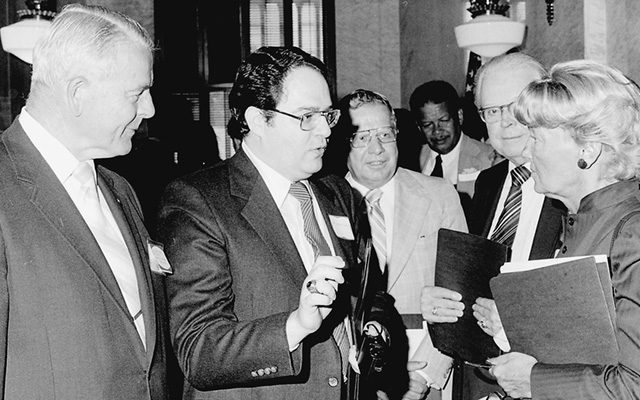 Anthony Swiatek and Donna Pope discuss the "MP" initials on the 1982 Washington half dollar, which were those of Matthew Peloso. Looking on at left is Adna Wilde, president of the American Numismatic Association.

Arriving early at the Denver Mint on July 1, 1982, for the ceremonial first strike of the Uncirculated version of the George Washington commemorative half dollar paid dividends.

Although no longer used by the U.S. Mint, galvanos were mounted in a reduction-engraving machine, which precisely traced designs, reduced the size, and cut exact replicas into the blank faces of die steel to create master hubs.

The galvanos of the coin, each about the size of a large dinner plate, were on display and afforded an opportunity to see minute details. Swiatek noticed that Chief Sculptor-Engraver Elizabeth Jones’ initials were on both sides, above the horse’s back and next to Washington’s right arm on the obverse; in the grass below the colonnade on the right side of the reverse. Then he spotted “MP” on the left side of the reverse in the shrubbery next to Mount Vernon.

Invitees and Mint officials were beginning to fill the foyer. Mint Director Donna Pope was talking to ANA President Adna Wilde and two other men. Swiatek joined the conversation and asked Pope why the letters “MP” were in the shrubbery. She frowned as though she did not understand the question.

Swiatek repeated the question with more details. It was obvious she did not have a clue, but she smiled and promised to get an answer to his question.

All in attendance were ushered into the large conference room at 9 a.m. Denver Superintendent Nora Hussey presided at the “briefing” and Pope enthused about the coin to be struck, noting Jones as the designer.

Swiatek approached Pope as the group headed down the hallway in route to the coining press. Pope confirmed that the “MP” stood for Matthew Peloso, a member of the engraving staff. Obviously there had been a phone call to the Philadelphia Mint.

Recently, Jones explained that she designed and executed the model for the obverse. She also designed the reverse. She sculptured everything on the reverse model except the lettering for the legends and motto. She said Peloso was excellent at details, especially lettering.

With the final deadline looming, he volunteered to do the lettering. “I thought his work should be recognized. That’s why his initials are on the reverse,” Jones said.