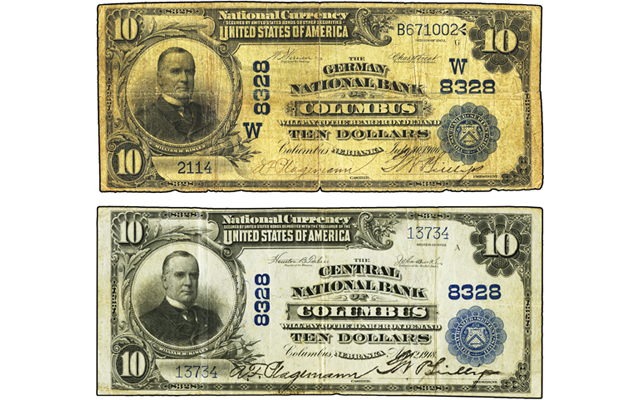 Because of anti-German sentiment during World War I, many national banks that had the word “German” as part of their name were renamed. Illustrating such a change are the faces of two Series 1902 $10 national bank notes, both from the same Columbus, Neb., bank. 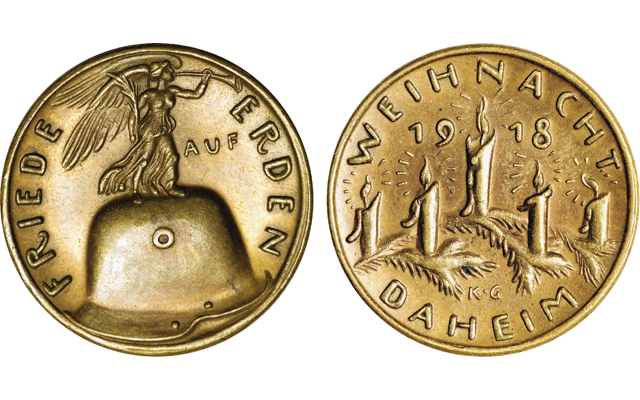 Among the most prolific of German engravers was Karl Goetz, who executed this 1918 Christmas medal, one of many he created between 1914 and 1918.

On the homefront, soon after the outbreak of World War I, anti-German sentiment in the United States escalated.

Many cities across the nation held large populations of German immigrants and citizens of German ancestry.

Many of these same cities had banks chartered with “German” as part of the registered name. The anti-German sentiment reached such a level that it began to affect business, and many of these “German” banks legally changed their names.

German medalist and engraver Karl Goetz is recognized as possibly the most prolific and famous artist who generated war-themed medals and tokens.

Among his contributions, illustrated on this page, is an example from among several Christmas medals he executed during the war. The 1918 medal is more reflective of simple relief at the end of the war, since the war was effectively over a month before Christmas.

The obverse features a trumpeting, winged figure, standing on what appears to be a helmet, with the German inscription FRIEDE AUF ERDEN, translating to “Peace on Earth.”

The reverse depicts Christmas greenery on which five burning candles are placed. The inscription WEINACHT DAHEIM around translates to English from German as “Christmas at home.”