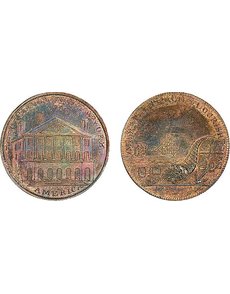 The Theatre at New York token, the size of a British penny, was produced in Proof finish for 18th century collectors. The token’s obverse features the grand Park Theatre, circa 1797, on Park Row in New York.

In the canon of early American coins and tokens, you’ll find plenty of pieces that weren’t made in America. Some of them were coins that were produced overseas especially for American circulation, like the 1722 and 1723 Rosa Americana coinage.

Some were produced to circulate somewhere else, but came to America in large quantities, like the St. Patrick’s farthings and halfpence or William Wood’s Hibernia coinage.

Others weren’t meant to circulate in America at all, including a group I like to call “American Reference Tokens.” At least three of these pieces also fit into the Conder token series, struck for English collectors in the 1790s.

The so-called Kentucky token, struck after that state’s entry into the Union in 1792, is perhaps the best known. It was never meant to circulate. The design was made to capitalize upon the English interest in the American experiment.

Most known examples are high grade and spent their life in English cabinets. The obverse design played to the pro-American faction in England, with a central obverse design of a hand holding a scroll reading our cause is just and the legend unanimity is the strength of society.

The reverse depicts a radiant pyramid composed of starbursts representing each of the 15 states with the motto e pluribus unum. The piece marks a specific moment in the early American story, but in a different way than a New Jersey copper or a George Washington, Small Eagle cent — self-consciously, as an observer, rather than as an economic actor like a coin made for circulation.

Perhaps the rarest of the avidly sought American Reference Tokens is the Theatre at New York token — struck in penny size, with Proof finish for collectors. Peter Kempson issued penny-sized tokens featuring famous buildings, all in Britain, except for the grand Park Theatre on Park Row in New York. It reflects the earliest numismatic representation of a structure in the United States.

It’s a pity the token is so rare, as it would make a nice addition to a collection of 18th century American coins or medals. The Kentucky token is easily acquired and is often included in cabinets of American Colonial material.