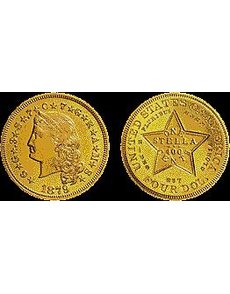 American coins, including a handful of famous rarities, are among the highlights in a Dutch auction scheduled for Nov. 3 and 4.

The auction house Schulman b.v., in Hilversum, the Netherlands, offers in its 337th auction 160 lots of American coinage, including several rarities. The U.S. coinage section is an unusually large offering for the firm, and is among 1,431 lots in the sale.

Leading the auction is a 1879 Flowing Hair Stella gold $4 pattern.

Proposed as a denomination suitable for international circulation, the $4 coin never materialized beyond the pattern stage, where multiple versions were produced in 1879 and 1880 with two distinct obverse designs each year, one a Flowing Hair Liberty motif and the other a Coiled Hair Liberty motif. The coin in the Schulman auction is the most common version, with more than 425 pieces known. The other three coins have individual mintages of between 12 and 18 pieces.

A highlight among the 722 lots of coins and paper money of or related to Netherlands and Dutch history happens to also have an American provenance.

The auction also features ancient and world coins and historical medals, the latter including papal medals.

The auction is scheduled to take place in the Hotel Lapershoek in Hilversum.

The complete catalog is posted online at the auction firm’s website, www.schulman.nl, and is also accessible through www.sixbid.com.