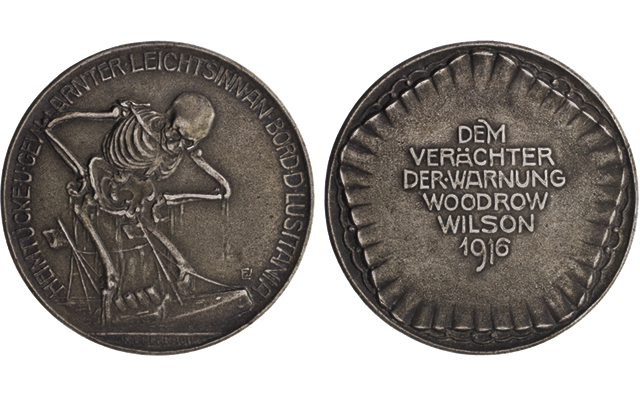 Death standing over the sinking Lusitania graces the obverse of this iron medal by Walther Eberbach. The reverse includes the inscription that translates from the German to English as “Woodrow Wilson ignored the warning.” 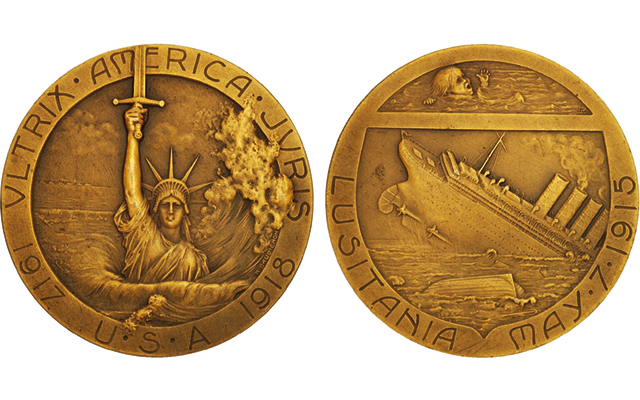 1918 bronze medal by French artist René Baudichon features the (Statue of) Liberty rising out of sea with a sword on the obverse, with ULTRIX AMERICA JURIS 1917 USA 1918 inscribed around. The reverse depicts a view of the Lusitania sinking, above a child drowning. Inscribed around is LUSITANIA MAY 7 1915. 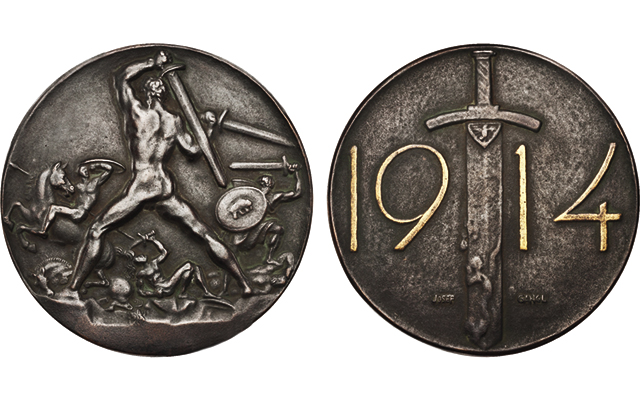 Struck privately in 1914 in Stuttgart, Germany, this bronze medal by artist Josef Gangl depicts on its obverse a nude male figure standing to the right with back to viewer, holding one sword in each of his raised arms, with a battle scene in the background. The reverse depicts a bloody sword separating the date. 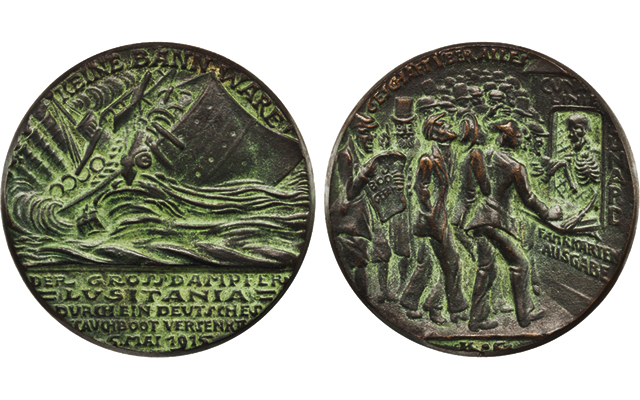 This Karl Goetz medal, struck privately in Munich, Germany, depicts on its obverse the sinking Lusitania, the deck loaded with contraband armaments including aircraft and cannon. The reverse depicts a skeltonized representation of Death in a Cunard ticket window, hoards of buyers lined up, one of whom reads a newspaper in which is printed a warning about sea travel 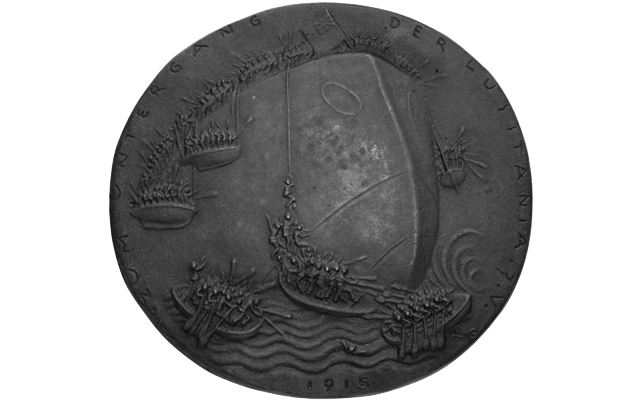 Uniface Ludwig Gies-designed medal features the bow of the Lusitania with passengers trying to get into life boats being lowered into the water.

To mark the 100th anniversary of the start of World War I, the American Numismatic Society launched a new web-based research catalog Aug. 12 comprising thousands of art medals, commemorative medals and tokens produced in response to this major conflict.

The creation of this new web tool is the work of ANS database developer Ethan Gruber.

At launch, Art of Devastation incorporates the roughly 1,400 relevant items in the ANS’s collection. In collaboration with other institutions, such as the Staatliche Museen zu Berlin, the Royal Library of Belgium, and the Kunsthistorisches Museum in Vienna, the catalog will continue to expand.

“ ‘Art of Devastation’ aims to be the first comprehensive catalogue of this abundant and varied material, one that takes full advantage of the web environment and linked open data,” according to ANS officials.

“Intended to help identify medals and tokens in users’ hands, ‘Art of Devastation’ offers unique catalogue numbers for types and variants for future referencing, and illustrates, where possible, multiple examples for comparison.”

Users of the “Art of Devastation” catalog will encounter mapping tools to assist identifying where the item was created, and where the events associated with it took place.

The online catalog incorporates links to other websites that include information about the individual medallic artists, as well as the people, events, and things, like weapons or symbols, that a medal depicts.

“Art of Devastation,” according to ANS officials, also serves as an invaluable tool for non-numismatists.

For centuries before the onset of the Great War, as World War I was known until the advent of World War II, medals and tokens served as a significant means of communication where easy and durable forms of mass communication did not exist.

“Whether issued by states, organizations, or individuals, their commemorative and propagandistic function was already well known and understood,” according to the ANS. “Increasingly, by the turn of the century, the medal had also become an important medium of more reflective and private artistic expression.”

Art medals were distinguished from traditional types of medals by their frequent lack of words, nonelite representation, greater emotional intimacy, experimental shapes, and cast production rather than striking, according to the ANS.

The war triggered the production of medallic art and tokens reflecting both sides of the conflict, often employing scarce metallic resources normally reserved for military purposes.

The sinking of the Cunard passenger liner RMS Lusitania by the German submarine SM U-20 on May 7, 1915, attracted considerable artistic output on both sides of the conflict.

French artist René Baudichon responded with a medal with themes paralleling those of Allied atrocity propaganda, depicting a drowning child avenged by Ultrix America, portrayed on the medal as the Statue of Liberty with a sword. The reverse depicts a view of the Lusitania sinking.

On the German side, the emotions were more complicated.

“The artists Karl Goetz and Walther Eberbach derided Allied hypocrisy on purported bans on armament shipments on passenger liners with their satirical takes on the sinking, while Ludwig Gies cast enmities aside to focus solely on the human tragedy of the event,” according to the ANS.

Van Alfen said it is interesting to note that the German medals depict the Lusitania wrongly sinking by its stern, instead of the bow.