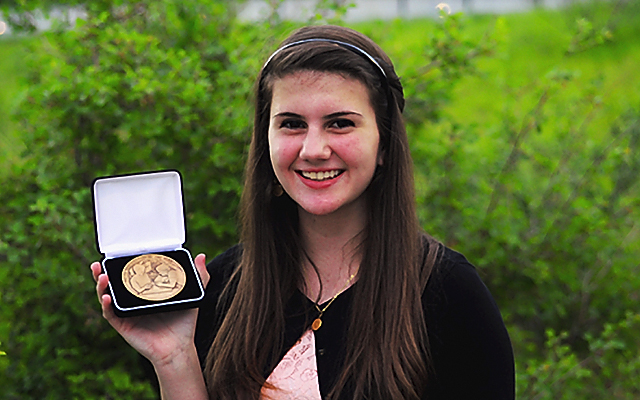 Peyton Souder, 16, of Jacksonville, Fla., was honored as the Outstanding Young Numismatist of the Year by the American Numismatic Association during the organization's 2014 Summer Seminar in June.

Like many in numismatics, Peyton Souder is driven by the relationships the hobby has provided her.

Souder, of Jacksonville, Fla., was named the Outstanding Young Numismatist of the Year during the American Numismatic Association's Summer Seminar Graduation Banquet for Session 1 on June 25 in Colorado Springs, Colo.

The 16-year-old is a member of the Greater Jacksonville Coin Club, Florida United Numismatists and the Original Hobo Nickel Society. She has won multiple awards for exhibiting at various numismatic events in Florida, including the FUN convention. She is also a past recipient of the Greater Jacksonville Coin Club's Paul O'Day Award for her volunteer service.

She said she did not expect her name to be called as the ANA’s Outstanding Young Numismatist of the Year.

“My head just went down and I turned a new shade of red that I never knew was possible,” Souder said.

She said she was drawn to collecting because of the connection it developed between her and her dad, who introduced her to the hobby during trips to a local flea market every Sunday. Today, the two go to shows together and bond over what they come across.

“We’ve definitely come a lot closer through sharing what coins we bought or what coins we sold,” Souder said. “We have something to talk about that we both really enjoy.”

She said other friendships fostered through numismatics have been rewarding, as well.

“My club is full of interesting and hilarious and such generous people that makes me want to give back and make them proud,” Souder said.

Souder has attended the last four Summer Seminars and was in charge of the first of two YN Auctions held at this year’s event. The auction raised $12,500 for the YN Fund, and another $1,500 was raised that is earmarked for the ANA's new YN College Scholarship program, which will provide a graduating senior with a $1,000 scholarship to use toward the university, college or trade school of the winner's choice.

For her part, Souder said she has been approached by both Heritage Auctions and Numismatic Guaranty Corp. about internships. While she isn’t sure what career path she’ll follow yet, she’s convinced she won’t burn out on numismatics.

“I think it's always going to be a part of my life,” Souder said.

Results of the Young Numismatist Literary Awards were also announced at the banquet. The list of winners includes: