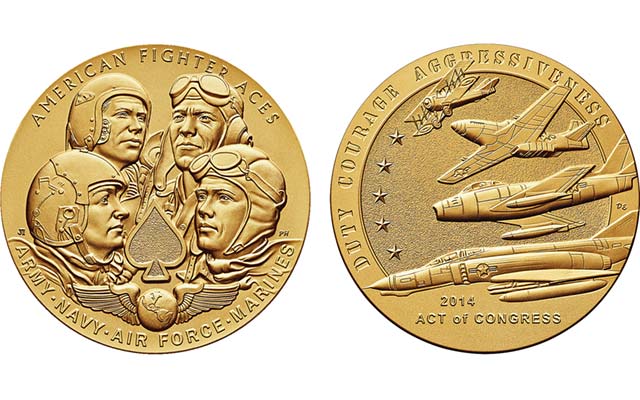 A congressional gold medal honoring the aerial combat exploits of military pilots designated as American Fighter Aces was presented to the organization’s representatives May 20 in Washington, D.C.

The congressional leadership presented the medal during ceremonies held in Emancipation Hall of the U.S. Capitol Visitor Center.

The medal’s authorizing legislation, Public Law 113-105, signed into law by President Obama on May 23, 2014, designates an American Fighter Ace as “a fighter pilot who has served honorably in a United States military service and who has destroyed 5 or more confirmed enemy aircraft in aerial combat during a war or conflict in which American armed forces have participated.”

The Commission of Fine Arts had recommended a different obverse showing four pilots across, positioned above an image of an enemy aircraft from the World’s War II era caught in the crosshairs of a U.S. warplane’s gun, and the inscription representing the four military branches.

The Citizens Coinage Advisory Committee recommended an obverse depicting Iskowitz’s primary obverse devices featuring the four pilots as finally approved, but with the inscription COURAGE TENACITY AND DUTY ABOVE ALL in place of the military branches.

The reverse was designed and sculptured by U.S. Mint Sculptor-Engraver Donald Everhart II.

The design features four aircraft flown by American Fighter Aces and includes five stars to represent the minimum number of aerial combat victories required for certification as an American Fighter Ace. From top to bottom, the planes depicted are a SPAD biplane, P-51 Mustang, F-86 Sabre and F-4 Phantom.

Inscriptions are DUTY COURAGE AGGRESSIVENESS; 2014 and ACT OF CONGRESS.

For the reverse, the CCAC had recommended a design depicting an eagle clutching thunderbolts inside an ace symbol with four, five-pointed stars above and the inscription along the top border of COURAGE TENACITY DUTY.

The CFA recommended a proposed reverse showing the four airplanes stacked, with the the inscription around COURAGE, TENACITY AND DUTY ABOVE ALL.

Regarding the approved designs, according to U.S. Mint officials via email, "Each of the texture patterns (bottom of the reverse incused lettering, the interior of the ace of spades and the field behind the planes) was carefully designed and applied using 3D modeling displacement methods."

Bronze duplicates of the congressional gold medal are to be offered for sale by the U.S. Mint for $39.95 for the 3-inch medal and $6.95 for the 1.5-inch version.