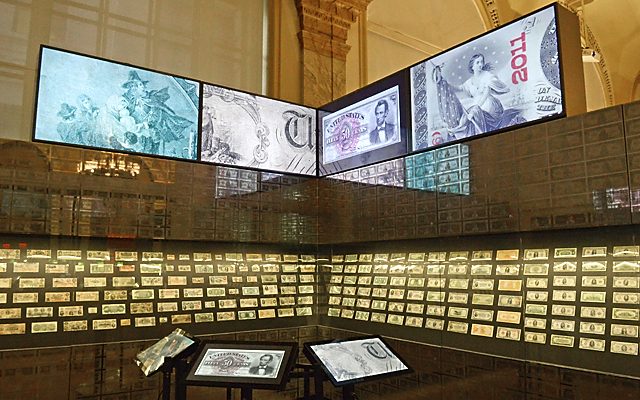 Shown is a gallery from the “America in Circulation: A History of US Currency” exhibition on April 15 at the Museum of American Finance in New York City.

More than 125 people attended a reception to open the “America in Circulation: A History of US Currency” exhibition on April 15 at the Museum of American Finance in New York City.

Among the attendees were members of the museum and the New York Numismatic Club, as well as colleagues and associates of Mark Shenkman, whose collection is featured in the exhibit. In his comments at the opening, Shenkman told of his passion for American history, finance and graphic arts, all of which have come together in his collection.

Museum President David Cowen said at the opening: “Today, there are only seven notes in circulation,” referring to the modern $1 to $100 Federal Reserve notes. “Yet most Americans don’t realize that both the banks and the government were issuing many different types of currency for most of our nation’s first 150 years. The notes in this exhibit tell the story of the development of America, and their striking beauty makes them pieces of art in and of themselves.”

The exhibition features approximately 250 notes, including examples of Colonial and Continental currency, obsolete notes, and Confederate notes It also includes all the legendary Federal issues.

An innovation to the presentation is that visitors have the opportunity to explore money in more depth through large interactive touch screen displays —computer terminals that allow users to get close to the art. Visitors can zoom in and see the engraver’s work in detail, which is also flashed above on a large overhead screen. An online version of the exhibition can be seen at moaf.org/money.

“America in Circulation” will be on view through March 2018. The Museum of American Finance is located at 48 Wall St., a 1929 landmark. It is open Tuesday through Saturday from 10 a.m. to 4 p.m. Admission is $8 generally, but $5 for students and seniors.