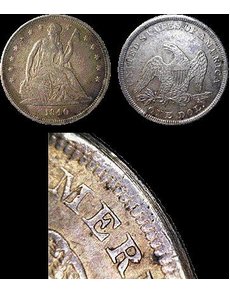 On the obverse, interior details are blurry and weak, above. On the reverse, some of the rim dentils appear to float in the field, right.

The latest counterfeit silver dollar seen at ANACS is the 1840 Seated Liberty dollar shown here. It is a fairly decent imitation of a genuine coin — the weight, diameter and thickness are all accurate, and the overall appearance is good.

However, once you begin to take a close look at the surfaces and the details, detection of this counterfeit is not exceptionally difficult.

Although this fake has the look of a coin in Extremely Fine to About Uncirculated condition, the interior details are a bit blurry and indistinct. The stars lack sharpness, and give the appearance of being “stretched” toward the rim.

This stretching can occur on a genuine coin where the die is distorting due to overuse, but the total mintage for the 1840 Seated Liberty dollar is only 61,000 pieces, so this particular die should not exhibit this type of die wear.

On the reverse, the rim dentils are weak, with some of them appearing to “float” in the field instead of being attached to the rim. An unusual raised bulge appearing on the reverse rim at the 7 o’clock position is easy to spot, even without the use of a magnifier.

Lastly, the edge reeding is incorrect when compared to a genuine coin — the size and spacing of the reeding is different.

This is not unusual for recent fakes — even though the counterfeiter spends a lot of time and effort getting the obverse and reverse details right, virtually nothing is done to ensure accuracy with the edge reeding.

The hard part is getting a good look at the edge of the coin — most online auctions do not include an image of the edge, and most holders do not permit edge inspection.